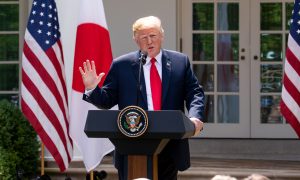 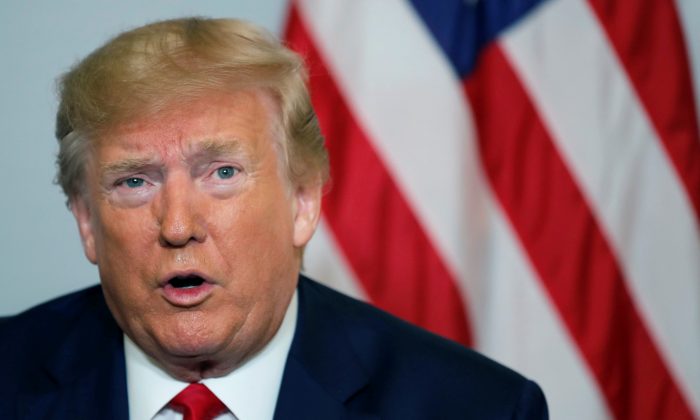 Asked if he was surprised that Zarif was at the summit the day prior, Trump told reporters on Aug. 26 that he wasn’t, before telling them that they got the story wrong.

“No, no, no. He asked my approval, President Macron. … We have a very good relationship. Look—you know, that’s another thing you got wrong,” Trump said.

“This was the best meeting we’ve had with President Macron, in France. It was straight up—now, we’re not finished yet. We have another, sort of, a day left. We have a lot of meetings, including with the president of Egypt, which I’m looking forward to. And I’m meeting with [German Chancellor] Angela Merkel in a little while. And we’re meeting with a few others. And we have some very important meetings planned, plus we have some sessions. And then we’ll have a news conference.”

Trump said that Macron spoke to him regarding Zarif.

“I said, ‘If you want to do that, that’s OK.’ I don’t consider that disrespectful at all, especially when he asked me for approval,” Trump said.

“I knew he was coming in and I respected the fact that he was coming in. And he met with President Macron. And Iran has got a very difficult situation. They’re in a position that’s not a very good position from the standpoint of economics. And that’s OK, because we can clear that up very quickly,” he said.

“I’m looking to have a really good Iran, really strong. We’re not looking for regime change. You’ve seen how that works over the last 20 years. That hasn’t been too good. And we’re looking to make Iran rich again. Let them be rich. Let’s let them do well, if they want, or they can be poor as can be. They can be like they are now. And I’ll tell you what: I don’t think it’s acceptable, the way they’re being forced to live in Iran. And what we want … it’s got to be non-nuclear. It’s got to be non-nuclear.”

Trump said the United States wants a new agreement with Iran, before denouncing his predecessor, former President Barack Obama, for the nuclear deal that included billions of dollars being sent to Iran.

Iran is “under a lot of financial stress. We put sanctions. Secretary of the Treasury is here right now. And he’s really, very expert at what he does. And he’s done a very effective job,” Trump said.

“It’s soon going to be time to meet with Iran, and it’s going to be a great thing for Iran. They have a great potential,” Trump later said.

“Iran has a chance to really build themselves up and be a very great nation—greater than before. But they have to stop terrorism. That is your number one nation of terror. Now, not in the last year and half, two years, because they can’t spend like they used to spend. They took President Obama’s $150 billion and they doled it out to terrorists all over the place. I think they’re going to change. I really do. I believe they have a chance to be a very special nation. I hope that’s true.”