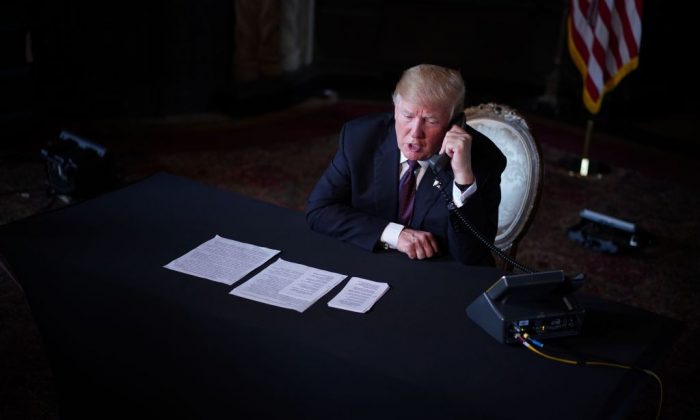 US President Donald Trump speaks to members of the military via teleconference from his Mar-a-Lago resort in Palm Beach, Florida, on Thanksgiving Day, Nov. 22, 2018. (MANDEL NGAN/AFP/Getty Images)
Trump Administration

President Donald Trump told reporters that he wouldn’t rule out shutting down the federal government over border security, primarily to fund a wall on the southern border, echoing statements he’s made in the past to urge Congress to act.

Congress still has to fund part of the federal government before the New Year, and Trump said on Nov. 22 that there “certainly could” be a shutdown if Congress doesn’t act on border security, “which the wall is part of.”

The president added that stopping the caravans of migrants from Central America is another top priority. Trump said he authorized the closing of part of the border two days ago. Now, caravan members have to wait in line on the Mexican side for their asylum claims to be processed.

While they wait, the migrants are using up local resources for the needy in Tijuana, Mexico. Some 300 Tijuana residents took to the streets on Nov. 18 to protest the migrants’ presence. The protesters told The Epoch Times they didn’t begrudge the immigrants wanting a better life, but wished they would come legally.

Trump also authorized the use of lethal force at the border, citing “serious criminals” inside the caravans that pose a threat to U.S. law enforcement. The Department of Homeland Security estimates there are some 500 criminals traveling with the caravans, the members of which number in the thousands.

“Do I want that to happen? Absolutely not,” he said. “[But] I’m not going to let the military be taken advantage of.”

Earlier this week, a judge ruled that a Trump executive order couldn’t prevent those illegally crossing the border from applying for asylum. The White House is appealing the ruling. Trump believes the San Francisco-based 9th Circuit Court is seeking to “legislate” from the bench and says he’s confident that the ruling will be overturned by the Supreme Court.

“It’s hurting our law enforcement tremendously and now that the military is on the border, it’s really hurting our military,” the president said.