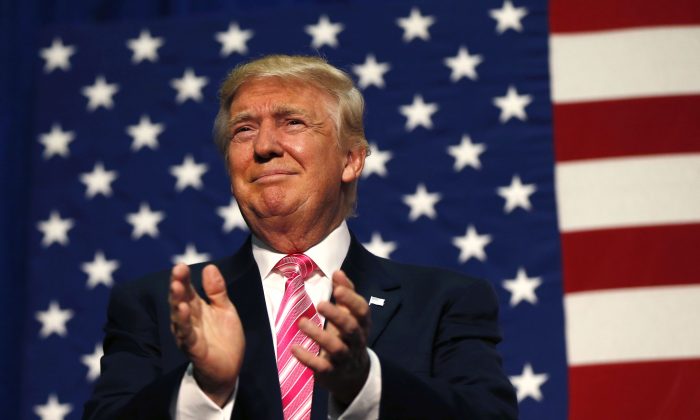 Trump Says GOP Must Improve Its Outreach to Black Voters

FREDERICKSBURG, Va.—Donald Trump says the party of Lincoln must improve its efforts to bring black voters back to the fold and that he wants an inclusive GOP.

Trump has been working in recent days to boost his appeal among African-American voters. On Saturday, the Republican presidential nominee assured supporters at a rally in Virginia that he and the GOP are up to the task.

“I fully recognize that outreach to the African-American community is an area where the Republican Party must do better, and will do better,” Trump said in Fredericksburg, located between Richmond and Washington in the critical battleground state of Virginia.

Trump Strikes New Tone on Campaign Trail, Says He Regrets Some of the Things He Has Said

Trump noted the GOP’s ties to Abraham Lincoln, the first Republican president and the chief executive who issued the proclamation freeing slaves, and said, “I want our party to be a home of the African-American voter once again.”

Trump’s new minority outreach efforts followed a shake-up in his campaign management in the face of falling poll numbers that quickly prompted noticeable changes to his campaigning tactics. In Fredericksburg, he spoke with the aid of a teleprompter, as he has at rallies all this week, and continued to strike a more inclusive, less caustic tone.

Still, Trump continued to rail against the impact of illegal immigration, claiming that an influx to the state of Virginia was putting “enormous pressure” on local schools and public services. And he blamed “border-crossers” who are “being relocated to the state” for taking jobs away.

“The people hurt most by our open border are low-income Hispanic and African-Americans who are competing for jobs and community resources against new arrivals,” he said.

Trump once again accused his Democratic rival, Hillary Clinton, of “bigotry,” saying that she took black votes for granted. He delivered the remarks to an overwhelmingly white audience.

Earlier Saturday in New York, he met with his new National Hispanic Advisory Council for Trump, which will work to help him to focus his message, as well as provide assistance with the campaign’s Hispanic outreach.

Polling shows Trump lagging significantly behind Clinton among minority voters, partially due to some of the more critical comments on immigration he has made since entering the race. He has accused Mexico of sending rapists and criminals across the border, and has vowed to deport all of the estimated 11 million people living in the U.S. illegally.