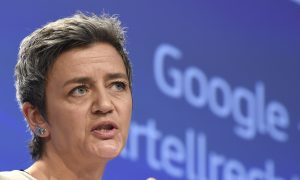 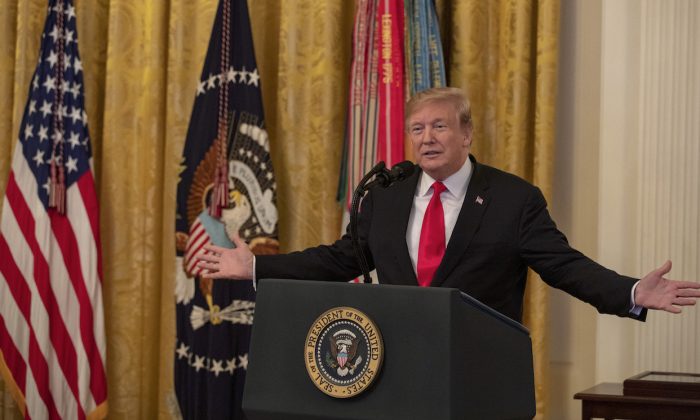 Trump Says Google Is Committed to US Not Chinese Military

WASHINGTON—Amid growing concern about the risks of Google and other U.S. companies doing business in China, President Donald Trump said on March 27 that the CEO of Google has “strongly stated” that he is “totally committed” to the American, not Chinese, military.

Earlier this month, Trump accused Google in a tweet of “helping China and their military, but not the U.S.”

Google is helping China and their military, but not the U.S. Terrible! The good news is that they helped Crooked Hillary Clinton, and not Trump….and how did that turn out?

“He stated strongly that he is totally committed to the U.S. Military, not the Chinese Military,” Trump said on Twitter of his meeting with Google CEO Sundar Pichai.

Just met with @SundarPichai, President of @Google, who is obviously doing quite well. He stated strongly that he is totally committed to the U.S. Military, not the Chinese Military….

“Also discussed political fairness and various things that @Google can do for our Country. Meeting ended very well!” Trump said.

….Also discussed political fairness and various things that @Google can do for our Country. Meeting ended very well!

“We were pleased to have productive conversations with the President about investing in the future of the American workforce, the growth of emerging technologies and our ongoing commitment to working with the U.S. government,” a Google spokesperson said in a statement.

Gen. Joseph Dunford, chairman of the Joint Chiefs of Staff, said Google’s artificial intelligence venture in China and other U.S. companies’ business in the country indirectly benefit the Chinese military and create a challenge for the United States as it seeks to maintain a competitive advantage.

Dunford’s comments reflect U.S. worries that any information an American company has or uses in China is automatically available to the Chinese government and its military.

Shanahan told senators that $5 trillion of China’s economy comprises state-owned enterprises and technology developed in the civilian world there transfers to the military sector.

“It’s a direct pipeline,” he said. “Not only is there a transfer, there’s also systemic theft of U.S. technology that also facilitates even faster development of emerging technology.”

Pichai has said Google has invested in China for years and plans to continue to do so.

In a tweet last week, Trump accused social media platforms Facebook, Google’s YouTube and Twitter of favoring his Democratic opponents over him and his fellow Republicans and said he would look into the issue.

Social Media is totally discriminating against Republican/Conservative voices. Speaking loudly and clearly for the Trump Administration, we won’t let that happen. They are closing down the opinions of many people on the RIGHT, while at the same time doing nothing to others…….

“We use the word ‘collusion’ very loosely all the time, and I will tell you there is collusion with respect to that because something has to be going on,” Trump said.