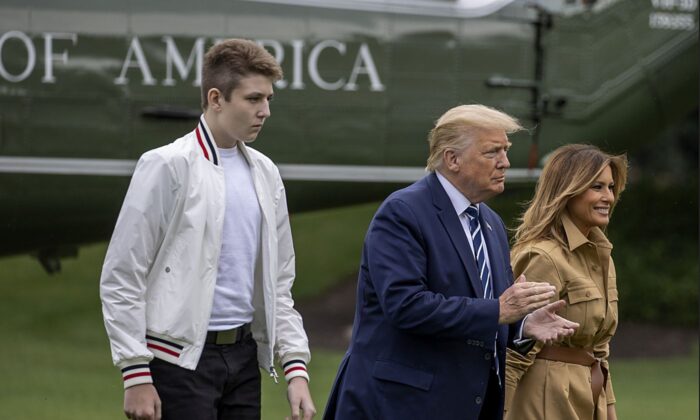 Barron Trump, US President Donald Trump and First lady Melania Trump walk on the South Lawn of the White House on August 16, 2020 in Washington, DC. Robert Trump, 71, the younger brother of the president, died Saturday in Manhattan. (Photo by Tasos Katopodis/Getty Images)
Politics

Trump Says Funeral for Brother Will Be Held Friday, Possibly at White House

President Donald Trump on Monday said a funeral for his late brother, Robert Trump, will likely be held Friday.

He told reporters that there might be a “small service” at the White House. “That would be, I think, a great honor to him. I think he’d be greatly honored. He loves our country. He loved our country so much,” Trump said.

“So I think it would be appropriate. So we’ll have, probably on Friday afternoon, a small service in honor of my brother, Robert,” he added.

The president’s brother died over the weekend at the age of 71, according to a White House statement. His cause of death was not disclosed.

“It is with heavy heart I share that my wonderful brother, Robert, peacefully passed away tonight,” the president wrote in a statement on Saturday night. “He was not just my brother, he was my best friend. He will be greatly missed, but we will meet again. His memory will live on in my heart forever.”

The president continued: “Robert, I love you. Rest in peace.”

Later, Trump told Fox News that he had a good relationship with his brother. It’s “not [been] a great weekend,” Trump told the news outlet.  “He was a great guy. He was a tremendous guy.”

“He was always there and he wasn’t a jealous person,” Trump said. “He was a very smart guy. He would be there and he’d be behind me.”

“He was so angry with China because of what happened where the plague came in, and they shouldn’t have allowed it to happen. They could have stopped it.”

Trump was referring to the pandemic caused by the CCP virus, a coronavirus that causes COVID-19, which first broke out in Chinese city of Wuhan before spreading around the world.

Robert Trump had previously retired to upstate New York where he was a noted philanthropist, serving as a trustee for the Angels of Light, a nonprofit organization that provides holiday gifts to children with life-threatening illnesses.

Robert Trump pulled away from the public eye in recent years and lived in Millbrook, New York. But in recent months, he attempted to block the publication of niece Mary Trump’s new book about President Trump’s family, “Too Much and Never Enough.” He requested a restraining order, saying it violated a nondisclosure agreement.

“Her attempt to sensationalize and mischaracterize our family relationship after all of these years for her own financial gain is both a travesty and injustice to the memory of my late brother, Fred, and our beloved parents,” he said. “I and the rest of my entire family are so proud of my wonderful brother, the president, and feel that Mary’s actions are truly a disgrace,” Robert Trump told news outlets several weeks ago.

Robert Trump told the New York Post in 2016 that he supported his brother’s campaign “1,000 percent.”

Fred Trump Jr., the president’s older brother and Mary Trump’s father, died in the 1981 at the age of 43 after battling alcoholism for years. The early death had an impact on Trump, who said he never drinks because of it.