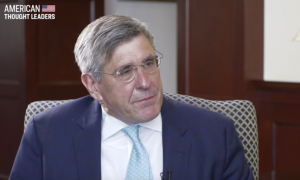 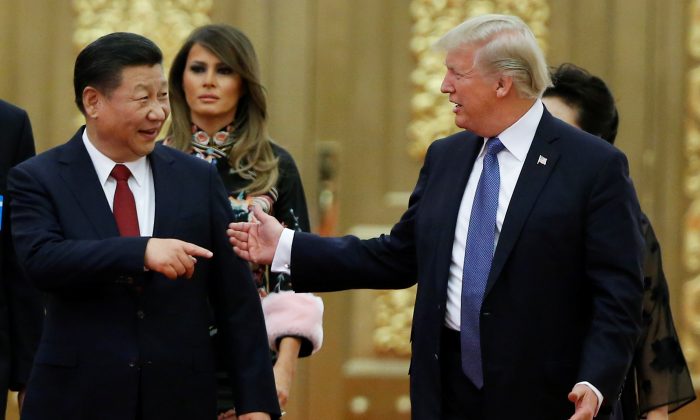 President Donald Trump and Chinese Leader Xi Jinping arrive at a state dinner at the Great Hall of the People in Beijing, China, on Nov. 9, 2017. (Thomas Peter/Reuters)
China-US News

President Donald Trump on June 14 said it “doesn’t matter” if Chinese leader Xi Jinping attends the upcoming G20 Summit or not, saying he believed the two countries would reach a trade deal at some point anyway.

“We’re going to see. Eventually they’re going to make a deal,” Trump said in an interview with Fox News.

Trump has on several occasions said the two leaders would meet at the G20 Summit in Japan later this month. However, the Chinese regime has not yet confirmed such a meeting.

On June 13, Trump said he did not have a deadline for Beijing to make progress towards a deal before additional tariffs on $325 billion worth of Chinese goods would be implemented.

Trump has previously said he would decide on whether to impose further tariffs after meeting with Xi during the G20 Summit.

In the Fox interview, Trump also said the United States was taking in billions of dollars worth of tariffs on Chinese goods, which was causing many companies to move their production out of China.

He added that the regime subsidizes their industries and manipulates their currency to offset the effects of the U.S. tariffs.

“They’re paying hundreds of billions in dollars. I have 25 percent on $250 billion,” he said. “They’re manipulating their currency in order to pay for it.”

Reiterating previous remarks, Trump then said he increased tariffs on $200 billion of Chinese goods in early May because the regime tried to renegotiate parts of the trade deal. Relations between the world’s two largest economies have since deteriorated.

The regime has since announced two measures in apparent retaliation. In late May, Beijing said it would set up an “unreliable entity list” of foreign companies that harm Chinese businesses’ interests. Last week authorities announced it was preparing an export control list that would ban certain Chinese technology from being transferred to foreign countries.

White House chief economic adviser Larry Kudlow said on June 13 that there are no formal plans yet for a meeting between Trump and Xi at the G20 Summit.

Speaking at the Peterson Institute for International Economics, Kudlow explained the impetus for the current trade war with the Chinese regime.

“We didn’t start this,” Kudlow said. “What I will call the China problem has been going on for a long time, several decades. But President Trump is the first guy in these several decades to take strong actions to remedy a very unbalanced trading relationship, where the Chinese have violated international trade law.”