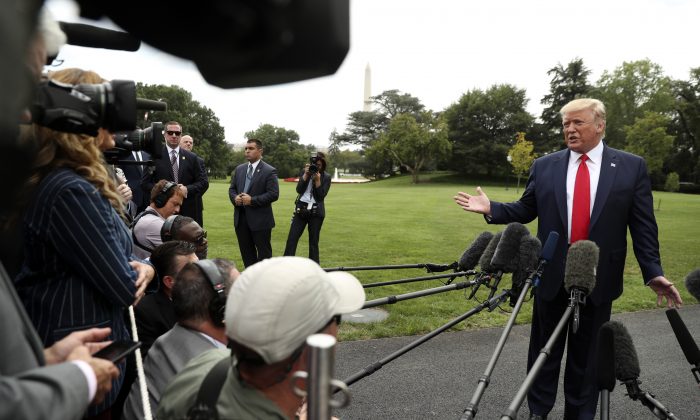 President Donald Trump speaks to members of the media on the South Lawn of the White House in Washington, Monday, Sept. 9, 2019, before boarding Marine One for a short trip to Andrews Air Force Base, Md., and then on to North Carolina. (AP Photo/Andrew Harnik)
US-China Relations

President Donald Trump said Sept. 9 that Chinese regime wants to engage in trade talks with the United States, as the Chinese economy suffers from the effects of the more than yearlong trade war.

“[China’s] supply chain is crumbling because they can’t pay the tariffs,” Trump said at a rally in North Carolina rally on the night of Sept. 9.

“Hundreds of billions of dollars have been and are coming into our country in the form of tariffs and China’s eating the cost,” he added.

A growing number of international firms are considering moving part of their U.S.-bound production away from China to countries like Vietnam and Cambodia as a result of U.S. tariffs, as well as due to other factors such as rising Chinese labor costs.

These companies include U.S. tech giants such as Google, Apple, and Microsoft, and apparel retailers such as Steve Madden and Gap.

The trade dispute between the world’s two largest economies escalated in August, after Trump announced additional tariffs on billions of dollars of Chinese goods in response to a lack of progress in trade talks.

Trump said the Chinese regime has been exploiting the United States for decades with its unfair trade practices, such as intellectual property theft, but his administration’s tough policy on China has been able to turn the situation around and “now it’s working the other way.”

The two sides are heading back to the negotiating table in coming weeks. Chinese officials at the vice-minister level are due to travel to Washington for negotiations in mid-September, followed by more talks with Chinese Vice Premier Liu He in Washington in October.

Treasury Secretary Steven Mnuchin told reporters outside the White House on Sept. 9 that Yi Gang, the governor of the People’s Bank of China, will also attend the October meetings to discuss “currency and currency manipulation.”

“We’ll see what happens, but unless we’re going to make a good deal or a fair deal for our country,” Trump said.

“Let’s face it: We cannot go back to a situation where giving hundreds of billions of dollars to China becomes standard fare. Not going to happen.”