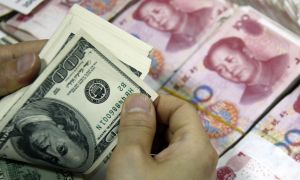 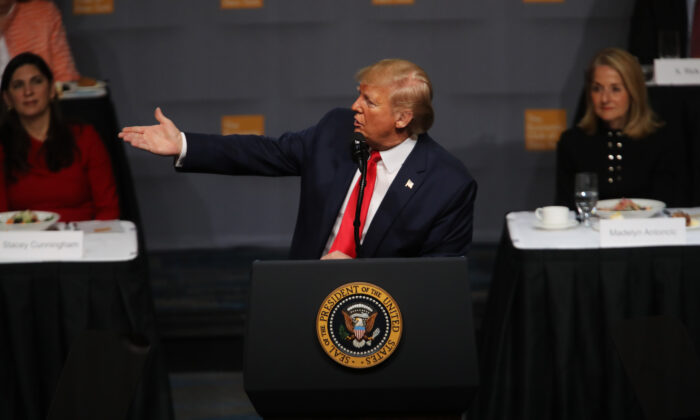 President Donald Trump said the United States is “close” to reaching a phase one trade deal with China, while warning that he would “substantially raise” tariffs if the deal collapses.

“They are dying to make a deal. We’re the ones that are deciding whether or not we want to make a deal,” Trump said during a speech at The Economic Club of New York on Nov. 12.

“We’re close. A significant phase one trade deal with China could happen. Could happen soon. But we will only accept a deal if it’s good for the United States and our workers and our great companies.”

The two countries are currently working to finalize the text of a phase one trade agreement, which is set to cover intellectual property (IP) protections and Chinese purchases of U.S. farm goods. It would ease tensions in a trade dispute spanning more than a year and involving tit-for-tat tariffs on billions of dollars worth of imports.

Trump said that if a deal couldn’t be struck, he would substantially raise U.S. tariffs on Chinese goods. “And that’s going to be true for other countries that mistreat us too.”

Reuters, citing unnamed U.S. officials, reported earlier this month that the December tariffs may be scrapped as part of the phase one trade deal.

Last week, China’s Commerce Ministry said a deal would include tariff rollbacks, but Trump later refuted the claim, saying he hasn’t agreed to such a proposal.

Trump, in his Nov. 12 speech, said the administration has “taken the toughest-ever action to confront China’s trade abuses,” including what he described as China’s manipulation of the World Trade Organization (WTO).

“Since China’s entrance into the WTO in 2001, no one has manipulated numbers better or taken advantage of the United States more [than China].”

Trump said previous U.S. leadership was to blame for allowing this situation to develop.

The cost of doing nothing to tackle Beijing’s trade abuses “was killing us as a country,” he said. “When you say, ‘Gee, let’s just keep it the way it is with China,’ that would be the real cost. We can’t do that.”

The president also recounted Beijing’s decision in May to backtrack on commitments negotiated over months of talks, which prompted Trump to raise tariffs to 25 percent from 10 percent on $200 billion of Chinese goods.

At the time, the two sides had the “hard points” negotiated, including on intellectual property and removing market barriers in China, Trump said.

“And then one day, we get a call,” he said. “They’d like to see us. And we saw them, and they explained they can’t do three or four things that we already agreed to.” Having worked in real estate in New York City, Trump said he’s heard that type of response before.

Still, he was a “little surprised” at the time. “It’s China. They’re not supposed to do that,” he said.

“I tell you what, I bet you they wished they didn’t do it [backtracking],” Trump said, given the tariff increases that were imposed shortly after.

Also on Nov. 12, White House economic adviser Larry Kudlow said in a CNBC interview that the United States and China have made progress on IP theft, financial services, currency stability, commodities, and agriculture.