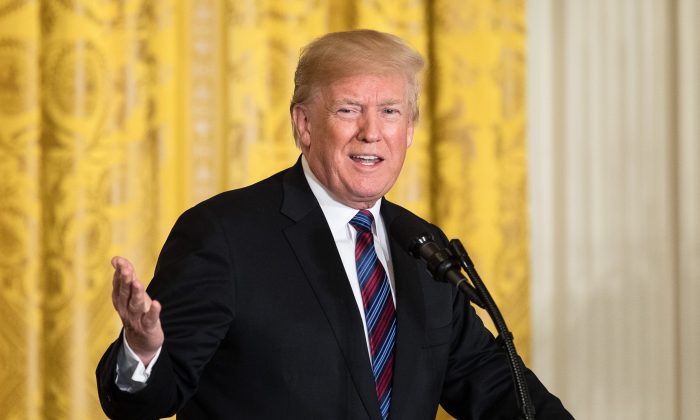 WASHINGTON—After another round of talks failed between congressional leaders and the White House over border security, GOP leaders said Democrats need to bring a plan to the table.

“Not one single time have the Democrats offered a counter,” said Rep. Steve Scalise (R-La.) following the meeting at the White House on Jan. 9. “They need to come back to the table with some type of serious plan.”

The meeting was attended by Republican leaders as well as several Democrats, including Speaker of the House Rep. Nancy Pelosi (D-Calif.) and Senate Minority leader Sen. Chuck Schumer (D-N.Y.).

By all accounts, the meeting was brief.

Trump posted on Twitter after the meeting: “Just left a meeting with Chuck and Nancy, a total waste of time. I asked what is going to happen in 30 days if I quickly open things up, are you going to approve Border Security which includes a Wall or Steel Barrier? Nancy said, NO. I said bye-bye, nothing else works!”

Vice President Mike Pence said the administration has presented multiple offers and plans during the three weeks of negotiations, but the Democrats are adamant they won’t support any funding for a border barrier.

“I can give you 15 speeches [Schumer] gave, in which he talked about border security,” Trump said before the meeting. “The only reason they’re against it is because I won the presidency.”

Trump addressed the nation from the Oval Office on Jan. 8 to outline the case for increased security on the Southwest border.

“Last month, 20,000 migrant children were illegally brought into the United States—a dramatic increase.  These children are used as human pawns by vicious coyotes and ruthless gangs,” he said. “In the last two years, ICE officers made 266,000 arrests of aliens with criminal records, including those charged or convicted of 100,000 assaults, 30,000 sex crimes, and 4,000 violent killings.

“Some have suggested a barrier is immoral. Then why do wealthy politicians build walls, fences, and gates around their homes? They don’t build walls because they hate the people on the outside, but because they love the people on the inside. The only thing that is immoral is the politicians to do nothing and continue to allow more innocent people to be so horribly victimized,” the president said.

Trump said the proposals he’s presented to Congress were developed by law enforcement professionals and border agents at the Department of Homeland Security.

Following Trump’s address on Jan. 8, Pelosi and Schumer responded, saying a border wall would be expensive and ineffective.

Schumer said Democrats want border security, but “we sharply disagree with the president about the most effective way to do it.”

“There is an obvious solution: Separate the shutdown from the arguments over border security,” Schumer said.

Trump still has the power to declare a national emergency, which would grant him additional powers to command the nation’s resources—but it’s not unlimited. There are several federal statutes that specify what the president can do, explained lawyer Will Chamberlain, in a series of Twitter messages on Jan. 6.

Under federal law, the secretary of Defense has the emergency authority to take “funds, personnel, and equipment” from other civil works projects “to construct or assist in the construction, operation, maintenance, and repair of authorized civil works … essential to the national defense.”

The statute gives Trump the authority to use the civil works funding (some $4.8 billion in fiscal year 2019) for wall construction, Chamberlain said. Border barrier construction has already been authorized under the Secure Fence Act of 2006, which should be enough to satisfy the statute’s language, he argued. The only thing that remains is for Trump to justify the construction as “essential to the national defense.”

Other experts have provided conflicting explanations on whether Trump can or cannot use Defense Department money for the wall.There are currently 31 active national emergencies, including 11 declared by Trump’s predecessor Barack Obama, according to a CNN tally. Congress can block a national emergency with a joint resolution, but it would need to gather two-third majorities to overcome Trump’s veto power, Chamberlain said.