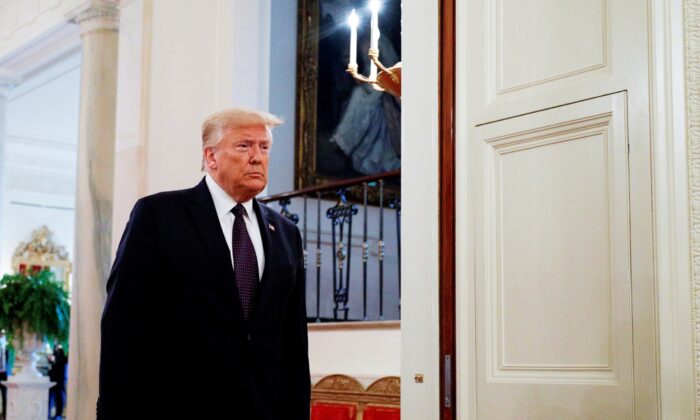 President Donald Trump arrives at the East Room at the White House in Washington on June 17, 2020. (Tom Brenner/Reuters)
Politics

“NYC is cutting Police $’s by ONE BILLION DOLLARS, and yet the @NYCMayor is going to paint a big, expensive yellow Black Lives Matter sign on Fifth Avenue, denigrating this luxury avenue,” Trump wrote on Twitter.

The president was responding to the City Council’s decision to pass a measure that would cut $1 billion from the New York City Police Department (NYPD) amid a spike in violent crime in the city, including random attacks on elderly people.

Trump said the budget cuts, which were enacted after protesters and activists called to defund the police, will “further antagonize New York’s Finest,” referring to NYPD officers.

“Maybe our GREAT Police, who have been neutralized and scorned by a mayor who hates & disrespects them, won’t let this symbol of hate be affixed to New York’s greatest street. Spend this money fighting crime instead!” he wrote.

Over the past several weeks, Trump has defended law enforcement, has sought to highlight acts of vandalism, and decried the removal of statues of various figures, including former President Woodrow Wilson and actor John Wayne. He also called out far-left agitators, arsonists, and rioters on Twitter.

On Wednesday, de Blasio said that the “Black Lives Matter” slogan will be painted on Fifth Avenue, adding that the location will be near the Trump Tower.

“Obviously we want the president to hear it because he’s never shown respect for those three words,” de Blasio told MSNBC. “When he hears Black Lives Matter, he presents a horrible negative reality of something that doesn’t exist, and he misses the underlying meaning that we’re saying we have to honor the role of African Americans in our history and our society.”

But after the budget was passed, New York City-based activists said that the $1 billion cuts don’t go far enough.

It comes as homicides across New York City have risen more than 21 percent over the first six months of 2020, and shootings are also up about 46 percent over 2019’s figures, according to NYPD data on crime, as reported by NBC4. Meanwhile, over the past several weeks, viral videos have shown men randomly attacking elderly people while walking in the street.

Muriel Bowser, the mayor of Washington, allowed “Black Lives Matter” to be painted near the White House during protests and riots following the death of George Floyd, who died in police custody in Minneapolis. Organizers for the group in the U.S. capitol called it a “performative” gesture.