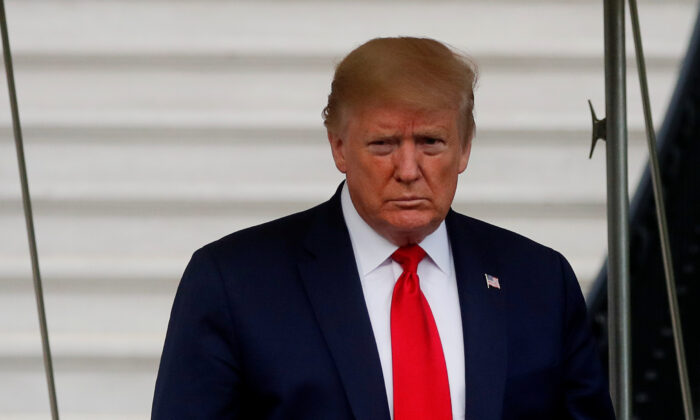 President Donald Trump departs on travel to the Camp David presidential retreat from the South Lawn at the White House in Washington, on May 1, 2020. (Carlos Barria via Reuters)
AMERICA

Trump Says Bailouts for Democratic-Run States Are Unfair to Republicans

“I think Congress is inclined to do a lot of things, but I don’t think they’re inclined to do bailouts. A bailout is different than, you know, reimbursing for the plague,” Trump told the New York Post, adding that there would likely be a strong economic rebound after the worst of the CCP (Chinese Communist Party) virus pandemic subsides.

He noted that Illinois, New York, and California—which are run by Democratic governors and have Democratic majorities in state legislatures—have “tremendous debt.”

“I don’t think the Republicans want to be in a position where they bail out states that are, that have been mismanaged over a long period of time,” Trump said.

Democrats have said that approving funding for municipalities and states is a priority for the fourth piece of stimulus legislation.

Maryland’s Republican Gov. Larry Hogan, who serves as the chairman of the National Governors Association, said Congress should approve funding to states.

“To stabilize state budgets and to make sure states have the resources to battle the virus and provide the services the American people rely on, Congress must provide immediate fiscal assistance directly to all states,” Hogan said in a statement in April, adding that states “must be allowed to use any state stabilization funds for replacement of lost revenue.”

Hogan stressed that if Congress doesn’t appropriate around $500 billion for states to meet budget problems, then states will have to make major reductions to “critically important services” around the United States.

McConnell’s remark, according to Cuomo, was “the most un-American, most uncharitable, ugly statement of all time” and said New York contributes more taxes and revenue than it gets back.

But Trump told the Post the state has “hostile” senators, Chuck Schumer (D-N.Y.) and Kirsten Gillibrand (D-N.Y.), who “come in and want things.”

“It’s not like a working environment that you want to be involved with. I never even had a phone call from Schumer or Kirsten,” he said.