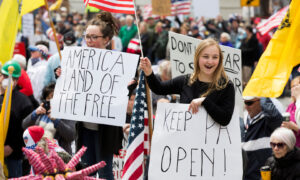 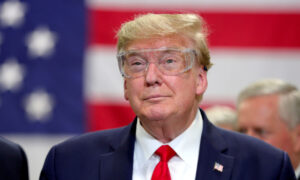 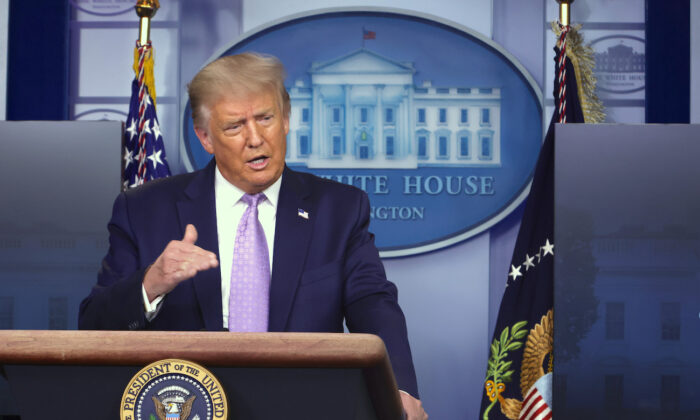 President Donald Trump speaks during a news conference at the White House in Washington on Aug 5, 2020. (Alex Wong/Getty Images)
AMERICA

President Donald Trump on Wednesday praised Arizona as a “model” for the nation in handling the CCP virus while avoiding a prolonged lockdown, which he called “punishing.”

“Arizona has been able to protect high risk populations and quickly bring its outbreak under control without the need to impose overly punitive measures,” Trump told reporters at a press conference at the White House. The president called Arizona “a model for applying a science-based approach to the decreasing cases and hospitalizations” without imposing a “punishing lockdown.”

“Arizona has a record and a record really to be proud of. It’s reduced the number of daily new cases by over 75 percent, cut the positivity rate in half and reduced ER visits by two-thirds, all the while keeping the economy functioning and functioning really well,” Trump told reporters.

The state experienced a severe increase in cases of the CCP (Chinese Communist Party) virus, also known as the novel coronavirus, starting around the end of May.

The number of daily confirmed cases is now on a downward trajectory after having reached a peak around late June to early July, according to the Arizona Department of Health Services. Arizona now has more than 182,200 confirmed CCP virus cases and 3,932 deaths recorded as of early Thursday.

At a meeting with Arizona Gov. Doug Ducey at the White House earlier in the day, Dr. Deborah Birx, coordinator of the White House Coronavirus Task Force, said that Arizona has set an example of how to get the reproduction rate of the CCP virus to below 1, which means the outbreak is subsiding. The replication rate is the number of new infections generated by each case.

“We’ve demonstrated now that you can keep a state open and retail open if you do these five commonsense pieces. And it’s created a safe—saved the hospitals and saved a lot of Arizonans,” Birx said.

Ducey told Trump that Arizona has implemented a number of mitigation steps such as encouraging the wearing of masks, social distancing, personal hygiene, and staying home if one feels sick.

“We’ve got masks in over 90 percent of our states right now … And we did take some further steps,” Ducey said. “We were in the unhappy but responsible position of dispersing large crowds. So bars and nightclubs and gyms all closed temporarily. But upon putting those steps out there, we’ve seen improvement every week, week over week, for 4 weeks.”

The Trump administration is pursuing similar actions to Arizona for other states. Members of the White House Coronavirus Task Force have visited more than 15 states to encourage a similar course of action, including Tennessee, Kentucky, Virginia, Indiana, and Ohio.

The federal government has provided Arizona with ample help and resources in its efforts to curb the spread of COVID-19, Trump said. Such efforts include the provision of nearly 70,000 vials of the antiviral drug remdesivir—enough to treat more than 11,000 patients—and the deployment of more than 1,000 national guard and medical personnel to Arizona.

Trump noted at the press conference that the goal for states is to “protect the most vulnerable, increase recovery rates … and prevent hospitals overcrowding, all the while preventing the kind of stringent lockdowns that would inflict substantial suffering in this phase of the battle.”

He noted that at its peak, Arizona still had 15 percent of beds available across the state, with about 20 percent of all occupied beds assigned to patients with the CCP virus. The state continued to allow other operations, including elective surgeries, to be performed.

“Today only 6 percent of the current hospitalizations in the state are related to the China virus,” Trump said.

Trump also said that the administration has supported the Navajo Nation with rapid testing systems and provided tribal governments in Arizona with relief funds. Ducey noted that the resources provided for the Navajo Nation and tribal nations are in excess of $1.1 billion.

The president acknowledged the potential negative effects that a prolonged mass lockdown has on society.

“Any proper analysis of infection control measures must take into account the short-term and long-term public health harms, including death caused by a far-reaching shutdown,” he said. “When you shut down, you have many many things that happen, from suicides to depression, to drinking, alcohol problems, to drug problems, to problems with marriages. You have people confined to their house, their apartment for a long period of time, you cause a lot of problems with that also.”

Trump said that prolonged lockdowns “impose a wide range of serious public health threats including higher levels of suicide, drug overdoses and other significant health harms, resulting from the depression that we talked about.”

“Social isolation, economic hardship, it’s been very tough for those people that are put in a lockdown position for too long. Really has been a very tough and harmful situation for many people,” he added. “The fact that these harms are not measured daily here or abroad it makes them really a very serious threat because people don’t know exactly what they are and how bad they are, but I think they’re very bad.”