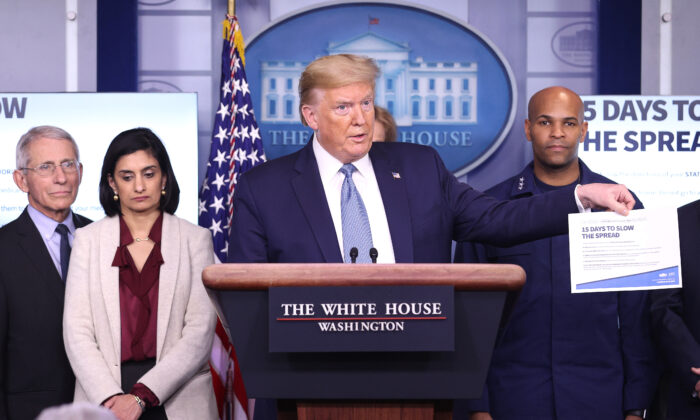 President Donald Trump flanked by members of the Coronavirus Task Force, speaks to the media in the press briefing room at the White House on March 16, 2020. (Win McNamee/Getty Images)
AMERICA

President Donald Trump called on all Americans to avoid gatherings of 10 or more people for at least the next 15 days as the coronavirus continues to spread.

“If everyone makes this change, or these critical changes and sacrifices now, we will rally together as one nation and we will defeat the virus,” Trump told reporters in the White House briefing room on Monday. “We’re going to have a big celebration altogether.”

The outbreak could last into July and August, the president said.

The administration’s new guidance advises Americans to avoid drinking and eating at bars, restaurants, and other food establishments. Trump also recommend against most social visits, including visiting nursing and retirement homes.

“My administration is recommending that all Americans, including the young and healthy, work to engage in schooling from home when possible, avoid gathering in groups of more than 10 people, avoid discretionary travel, and avoid eating and drinking at bars, restaurants and public food courts,” Trump said in a televised news conference.

The new White House guidelines come about a day after the Centers for Disease Control and Prevention recommended the cancelation of postponement of 50 people or more over the next weeks.

“Each and every one of us has a critical role to play in stopping the spread and transmission of the virus,” he said. When asked about a potential national quarantine, Trump said top U.S. health officials aren’t recommending such at measure at this time.

A number of state governors have ordered the closure of restaurants, bars, and schools in recent days. On Monday morning, the governors of New Jersey, New York, and Connecticut announced the shuttering of casinos, gyms, eating establishments, and bars.

Surgeon General Jerome Adams told CNN Monday that the United States is now at “a critical inflection point,” saying that the country has the same number of cases as hard-hit Italy two weeks ago. Italy is on lockdown after 27,000 cases of the virus have been confirmed.

“We have a choice to make: Do we want to really lean into social distancing and mitigation strategies and flatten the curve or do we just want to keep going on with business as usual and end up being Italy?” Adams said on the network.

As of Monday afternoon, more than 4,000 cases have been confirmed across the United States, according to data from Johns Hopkins University. Around 70 people have died as of Monday.

The virus, which causes the COVID-19 disease, first emerged in mainland China in late 2019, sickening tens of thousands inside the country. The ruling Chinese Communist Party has been criticized for what they said is an attempt to cover-up the virus and silence doctors when it was initially spreading through the country.