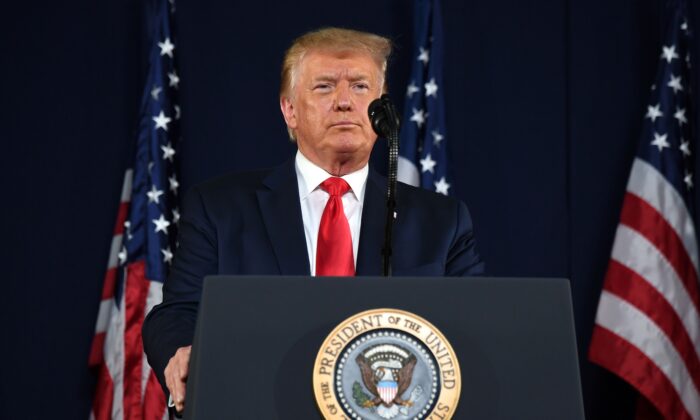 President Donald Trump gestures as he speaks during the Independence Day events at Mount Rushmore National Memorial in Keystone, S.D., on July 3, 2020. (Saul Loeb/AFP via Getty Images)
US News

Trump Says Americans Can Expect Another Round of Pandemic Stimulus Payments

President Donald Trump said Tuesday that Americans can look forward to another round of stimulus payments before the end of 2020.

“We are working on another stimulus package, and that will take place… very soon,” Trump told reporters on Tuesday. “The answer is yes … the economy is going up at rapid levels.”

Trump did not provide a specific date or amount for any potential future stimulus payments to people who have suffered during the COVID-19 pandemic. Over the past several months, tens of millions of people have filed for unemployment, although the Labor Department reported late last month that nearly 5 million new jobs were added.

A number of businesses were shuttered after governors implemented stay-at-home measures nationwide.

At the end of the month, expanded unemployment insurance payments of $600 extra per week are slated to discontinue. In some states, they will end about a week early.

In June, Trump told a reporter that Americans could see a stimulus payment larger than the ones that were authorized under the CARES Act, passed in March.

House Democrats have indicated that they are on board with another direct payment, having included direct payments in a $3 trillion bill known as the HEROES Act, which was approved in the House in May. However, top GOP senators said the bill continues too many unnecessary provisions and is too costly.

Some Democrats, meanwhile, have introduced legislation that would pay Americans up to $2,000 monthly during the pandemic.

GOP senators, however, have a mixed view of sending out more direct payments.

“My preference would be to extend unemployment insurance, but to do that in a more limited way, and a more targeted way,” said Sen. Mitt Romney (R-Utah) to reporters several weeks ago.

Senate Majority Leader Mitch McConnell (R-Ky.) gave perhaps the most details yet on Tuesday about direct payments, suggesting that Americans who make $40,000 or less could get them.

McConnel said that after the Senate’s recess is over on July 20, he will put forward legislation.

“I think the next round we’ve got to be more targeted to those who are really in need. So I hope we can target this a little bit better to those who have been hit hard because of COVID-19,” Sen. Ben Cardin (D-Md.) told reporters of a second stimulus payment.