Schumer, McConnell Suggest No Deal in Sight Over Pandemic Relief
0 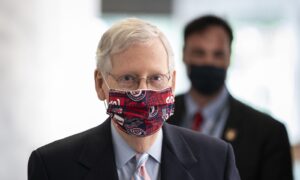 McConnell: 15-20 GOP Senators Will Not Vote for Any Virus Relief Deal
0 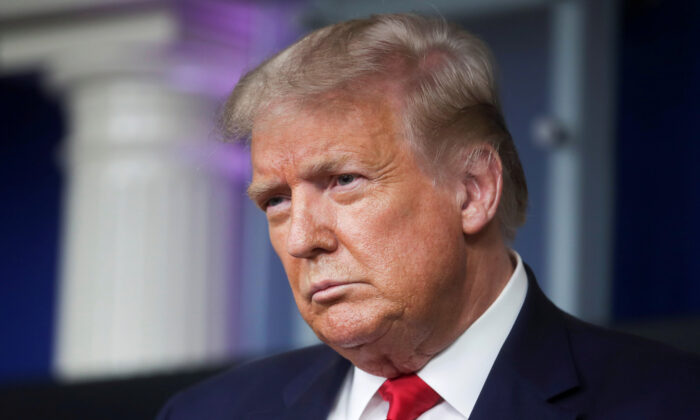 President Donald Trump listens to a question from a reporter during a CCP virus briefing in the Brady Press Briefing Room of the White House in Washington on Aug. 3, 2020. (Jonathan Ernst/Reuters)
Trump Administration

As Republicans and Democrats in Congress debate over the provisions of the next COVID-19 relief bill, President Donald Trump said that his administration is drafting an executive order to extend certain safeguards.

Upon departing the Oval Office for Ohio, I’ve notified my staff to continue working on an Executive Order with respect to Payroll Tax Cut, Eviction Protections, Unemployment Extensions, and Student Loan Repayment Options.

Previously, the president said that he may have to take direct action to re-enable a federal moratorium on evictions that was passed in the CARES Act several months ago, suspend payroll taxes for Medicare and Social Security, and extend unemployment benefits that expired on July 31.

“Eviction is a big problem” that is “very unfair to a lot of people,” Trump said at a news briefing on Aug. 5.

Trump also suggested that he will extend the $600-per-month unemployment benefits for an unspecified period of time. Those were also included in the CARES Act.

Regarding the suspension of the payroll tax, Trump said that “many economists” on “our side” support the measure, although it doesn’t have much support from Republicans or Democrats in Congress.

Trump appeared to take issue with a provision in the House-passed HEROES Act that would grant $1 trillion in funds to state and municipal governments.

The president described it as a “$1 trillion bailout” for “poorly run states … and cities.” He said that “they’ve been poorly run for a number of years,” saying that it isn’t “COVID-related.”

Treasury Secretary Steven Mnuchin, White House chief of staff Mark Meadows, House Speaker Nancy Pelosi (D-Calif.), and Senate Minority Leader Chuck Schumer (D-N.Y.) have been meeting on a daily basis since last week. Pelosi and Schumer have said that the talks have been positive, although Meadows told reporters on Aug. 6 that a deal isn’t likely to be made in the near future.

But Senate Majority Leader Mitch McConnell (R-Ky.) said he believes there will be a deal “at some point in the near future,” but isn’t sure “exactly when.”

“The argument is over how much [aid] is appropriate at this particular juncture,” he said in an interview on Aug. 6, noting that he will have to rely on Senate Democrats and some Republican senators to advance any proposals because some GOP lawmakers are far from agreement on their party’s own $1 trillion coronavirus relief measure.