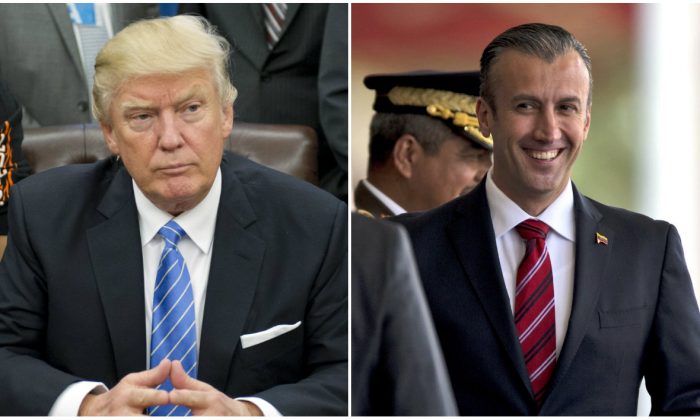 The executive decree, the result of a years-long investigation, is bound to ratchet up tensions between the new Republican administration and the United States’ harshest critic in Latin America. El Aissami is the most senior Venezuelan official to ever be targeted by the U.S.

The U.S. Treasury Department also sanctioned Samark Lopez, a wealthy Venezuelan businessman the U.S. described as El Aissami’s primary front man laundering proceeds through a network of companies in several nations. As part of the action, 13 companies owned or controlled by Lopez, including five in Florida, will be blocked and both men will be barred from entering the United States. Several real estate holdings in the Miami area tied to Lopez and worth tens of millions of dollars were also blocked.

There was no immediate reaction from the Venezuelan government or El Aissami, who has long denied any criminal ties. Lopez released a statement calling the actions baseless and “politically motivated.”

The U.S. Justice Department said there were no pending criminal charges against the two men.

The sanctions came a week after a bipartisan group of 34 U.S. lawmakers sent a letter to Trump urging him to step up pressure on Venezuela’s socialist government by thoroughly investigating El Aissami and immediately sanctioning top officials responsible for corruption and human rights abuses, including ones mentioned in an Associated Press investigation on corruption in food distribution and sales.

In the wake of President Nicolas Maduro’s bloody crackdown on anti-government protests in 2014, the U.S. Congress passed legislation authorizing the U.S. president to freeze the assets and ban visas for anyone accused of carrying out acts of violence or violating the human rights of those opposing Venezuela’s government. But Monday’s sanctions were imposed under rules passed during the Clinton administration allowing the U.S. to go after the assets of anyone designated a drug kingpin.

El Aissami, 42, has been the target of U.S. law enforcement investigation for years, stemming from his days as interior minister when dozens of fraudulent Venezuelan passports ended up in the hands of people from the Middle East, including alleged members of Hezbollah.

Venezuela’s top convicted drug trafficker, Walid Makled, before being sent back from Colombia in 2011, said he paid bribes through El Aissami’s brother to officials so they would turn a blind eye to cocaine shipments that have proliferated from Venezuelan ports and airports during the past two decades of socialist rule.

The action Monday made no mention of any ties to Hezbollah but said El Aissami had worked with drug traffickers in Mexico and Colombia to oversee multiple U.S.-bound cocaine shipments from Venezuela of over 1,000 kilograms.

El Aissami was named vice president last month as Maduro struggles to hold together a loose coalition of civilian leftist and military supporters whose loyalty to the revolution started by the late Hugo Chavez has frayed amid triple-digit inflation and severe food shortages. Recent polls say more than 80 percent of Venezuelans want Maduro gone.

The son of Syrian and Lebanese Druze immigrants, El Aissami is feared by many in the opposition for his association with Venezuela’s intelligence services from his long run as interior minister under Chavez. Since El Aissami became vice president, Maduro has handed him control of an “anti-coup commando unit” to go after officials and opponents suspected of treason.

A former Obama administration official said the decision to sanction El Aissami was held up last year, at the insistence of the State Department, for fear it could interfere in a Vatican-backed attempt at dialogue between the government and opposition as well as efforts to win the release of a U.S. citizen, Joshua Holt, jailed for months on what are seen as trumped-up weapons charges.

“This was an overdue step to ratchet up pressure on the Venezuelan regime and signal that top officials will suffer consequences if they continue to engage in massive corruption, abuse human rights and dismantle democracy,” said Mark Feierstein, who served as Obama’s top national security adviser on Latin America.

The talks between the opposition and Venezuela have since collapsed. The opposition blames Maduro’s administration, saying it didn’t follow through on a pledge to free dozens of political prisoners or set a date for regional elections after the government suspended a recall referendum against the president in October.

“The sanctions in and of themselves will not bring about a democratic transition,” Feierstein said. “That will require the Venezuelan opposition to remobilize its followers and U.S. diplomatic efforts to marshal governments in the region to isolate Maduro.”

Tensions between the U.S. and Venezuela have been on the rise for years. The countries haven’t exchanged ambassadors since 2010.

Trump mentioned the country only briefly during the campaign and it wasn’t clear if he signed off on the designation. Senior administration officials would only say anyone who had a need or desire to know was consulted.

Amid uncertainty on whether Trump would break from the Obama administration’s policy of relative restraint, Maduro had been holding back his normal fiery rhetoric. After blasting Trump as a “bandit” and “mental patient” during the campaign, Maduro has remained quiet since.

“He won’t be worse than Obama, that’s the only thing I dare to say,” Maduro said last month in an appeal to supporters to withhold judgment on Trump.

Maduro made no mention of the U.S. decision at an event Monday night alongside a visiting Chinese delegation.

In the wake of a travel ban against top Venezuelan officials in 2014, Maduro ordered the U.S. to slash staffing at its embassy in Caracas, accusing diplomats of conspiring to overthrow his government.

US Lawmakers Call for Action on Venezuela Food Corruption

Lopez, who was known to shuttle between the U.S. and Venezuela on a privately owned Gulfstream 200 jet that was also blocked by Monday’s actions, controls a network of companies spanning Venezuela, the British Virgin Islands, and Panama that did business with the Venezuelan government in the food, logistics, and oil industries, the Treasury Department said.

He was also listed as recently as 2012 as a major shareholder in Intercontinental Bank, a U.S. financial institution with a single branch in Miami, although that wasn’t among the assets designated by Monday’s action. Several of the U.S. companies list as their address a $2.4 million Miami condo in the trendy Brickell neighborhood with three pools and wraparound ocean views.

In his statement, Lopez said he would seek all legal remedies, saying he is not a government official and is being targeted only because of his relationship to El Aissami.

“The listing is unjustified in targeting a legitimate businessman,” said the statement on a new English-language website that portrays Lopez as an entrepreneur and philanthropist committed to Venezuela’s development.