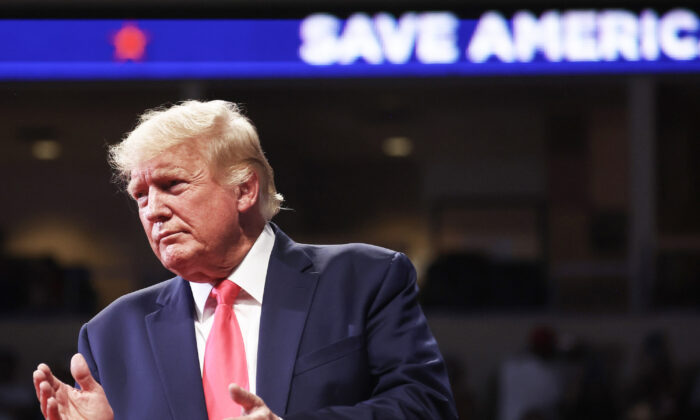 Former President Donald Trump on Tuesday revealed that he cannot leave politics during his first speech in more than a year in Washington, D.C.

“Never forget, everything this corrupt establishment is doing to me is all about preserving their power and control over the American people,” Trump said at the America First Agenda Summit in Washington on Tuesday. “They want to damage you in any form, but they really want to damage me so I can no longer go back to work for you.”

In his speech, Trump stopped short of declaring his candidacy for the 2024 presidential election. Previous speeches he’s made over the past year have suggested that he would again run.

The former president may have offered a preview of campaign rhetoric he might use, declaring to an audience that the United States no longer respects the rule of law.

“We’re living in such a different country for one primary reason,” he said, calling for the death penalty for drug dealers. “There is no longer respect for the law, and there certainly is no order. Our country is now a cesspool of crime.”

The latest data provided by the FBI shows the murder rate across the United States spiked 29.4 percent in 2020, compared with the previous year’s figures. That’s one of the largest single-year increases ever recorded.

Later, Trump made reference to the House committee investigating the Jan. 6 Capitol incident and said they won’t put a damper on him or the political movement he helped create.

“They really want to damage me so I can no longer go back to work for you, and I don’t think that’s going to happen,” Trump said of the Jan. 6 committee. “If I stayed at home and just took it easy, the persecution of Donald Trump would stop immediately. It would stop. But that’s not what I will do.”

Earlier on Tuesday, former Vice President Mike Pence spoke at the Young America’s Foundation in Washington. And while Pence demurred on a possible rivalry between him and Trump, the former vice president suggested that the two “may differ on focus.”

“I don’t know that the president and I differ on issues, but we may differ on focus,” Pence said. “I truly do believe that elections are about the future, and that it’s absolutely essential—at a time when so many Americans are hurting, so many families are struggling—that we don’t give way to the temptation to look back. But I think the time has come for us to offer a bold, positive agenda to bring America back. And I’ll continue to carry that message all across this nation.”