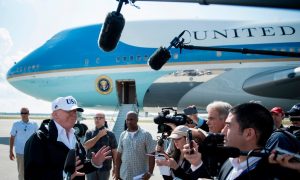 Is Tax Reform a Giveaway to the Rich?
0 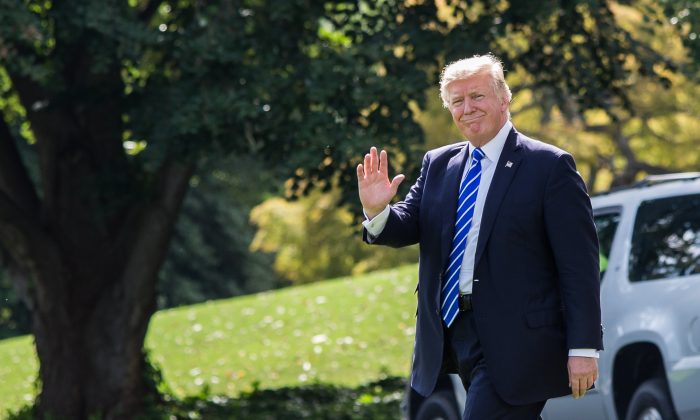 President Donald Trump walks to the South Lawn of the White House to board the Marine One on Sept. 26, 2017. Trump offered some of the first details of his tax reform plan in Indianapolis, Ind., on Sept. 27, 2017. (Samira Bouaou/The Epoch Times)
Politics

Under New Tax Plan, Corporate Tax Rate Would Be Cut to 20 Percent

President Donald Trump announced the details of his tax reform plan on Sept. 27.

The Trump administration, the House Committee on Ways and Means, and the Senate Committee on Finance released the framework for tax reform, with Trump offering some of the first details of the plan during remarks in Indianapolis, Indiana.

According to the plan, the top corporate tax rate will be cut from 35 percent to 20 percent. This is higher than the 15 percent proposed by Trump earlier but still below the 22.5 percent average tax rate of the industrialized world, Trump said.

“This is a revolutionary change, and the biggest winners will be the everyday American workers as jobs start pouring into our country, as companies start competing for American labor, and as wages start going up,” he said.

Trump told reporters as he departed Washington for Indiana that a 20 percent corporate tax rate was his “red line” and not negotiable.

For small businesses, the tax rate on the profits of pass-through businesses would be capped at 25 percent.

“This will be the lowest top marginal income tax rate for small and mid-sized businesses in this country in more than 80 years,” Trump said.

The plan includes the repeal of the corporate alternative minimum tax, or AMT, which is a complex parallel tax system allowing fewer exemptions and deductions than the standard tax system for certain taxpayers.

For the next five years, businesses will be allowed to write off or expense the cost of new investments immediately. And interest deductibility will be partially limited.

The committees will be looking to repeal some of the business tax credits with the exception of the R&D credit and the Low Income Housing Tax Credit.

There will be a shift from a worldwide tax system to a territorial tax system to bring corporate income parked overseas back to the United States. Under the current worldwide system, U.S. multinational corporations pay domestic tax on foreign earnings, which creates a competitive disadvantage for them.

“Our current tax system makes us one of the few developed nations in the world to punish our companies when they bring wealth earned overseas back into our country,” said Trump.

Under the territorial system, American companies will be able to bring those profits back to the country without paying additional taxes. This will level the playing field for U.S. companies, according to Trump.

As a transition to the territorial system, there will be a one-time tax payable on profits that have already accumulated overseas. Two different tax rates will be applied: one for cash and cash equivalents, and another, lower rate for illiquid assets.

The plan will also include base erosion rules to prevent companies from shifting profits artificially to tax havens. The committees will determine these rules.

According to Trump, one of the cornerstones of the plan is to create tax relief for middle-class families, mainly through tax cuts, higher standard deductions, and a larger child tax credit.

According to the plan, the zero-tax bracket will be expanded and standard deductions would nearly double in size to $12,000 for individuals and $24,000 for married couples.

The current seven brackets will be compressed down to three: 12 percent, 25 percent, and 35 percent. The committees will be given the flexibility to add a fourth-rate above the 35 percent on wealthy taxpayers.

Under current law, nearly 70 percent of taxpayers claim the standard deduction, while the remaining 30 percent itemize their deductions.

The plan will eliminate most itemized deductions, which will affect mostly the wealthiest families, according to Trump.

The plan also provides a larger child tax credit for families with children under the age of 17. Families get up to a $1,000 credit per child under current law. Although the exact amount is not specified, it will be substantially higher than $1,000, according to the plan.

“Our framework includes our explicit commitment that tax reform will protect low-income and middle-income households, not the wealthy and well-connected,” Trump said.

Tax deductions for home mortgage interest and charitable contributions will be retained.

The plan repeals the individual AMT that exists under current law.

“The AMT will make even less sense because we are repealing many of the special interest tax breaks that it was designed to deal with,” Trump said.

The plan will also end the estate tax, which is a tax on the transfer of the estate of a deceased person.

These changes will help eliminate the complexity of the code and allow taxpayers to file their taxes on a single sheet of paper, Trump said.

Over the next few months, the House and the Senate will build on this framework and produce legislation.

“Democrats and Republicans in Congress should come together finally to deliver this giant win for the American people and begin a middle-class miracle.”