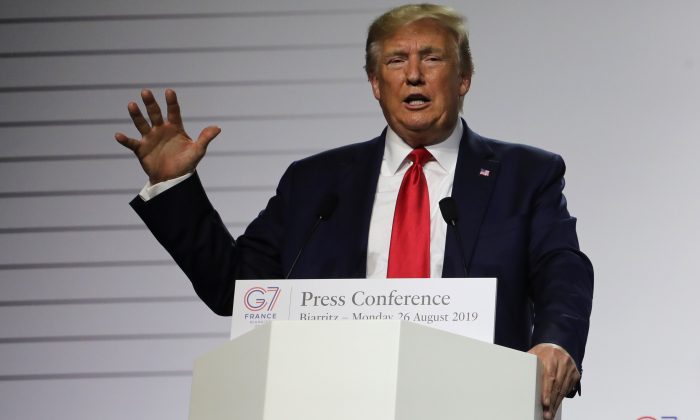 President Donald Trump and First Lady Melania Trump arrived back in Washington on the night of Aug. 26.

Trump, on Twitter, wrote that he was subject to “fake news” attacks that claimed he wanted to use nuclear weapons to blow up hurricanes.

“Just returned to Washington from France and the very successful G-7, only to find that the Fake News is still trying to perpetuate the phony story that I wanted to use Nuclear weapons to blow up hurricanes before they reach shore. This is so ridiculous, never happened!” Trump tweeted on Monday night.

Axios quoted an unnamed source as saying that Trump allegedly asked an official during a briefing: “I got it. I got it. Why don’t we nuke them?” in reference to hurricanes. It also claimed that at another time, he allegedly asked about bombing a hurricane.

Earlier in the day, Trump specifically blasted Axios, a news outlet that was started in 2017—the first year of the Trump presidency, over the story.

“The story by Axios that President Trump wanted to blow up large hurricanes with nuclear weapons prior to reaching shore is ridiculous. I never said this. Just more FAKE NEWS!” he tweeted.

The National Oceanographic & Meteorological Laboratory (NOAA) has a segment on its website about whether it’s feasible to nuke a hurricane before it reaches land.

Just returned to Washington from France and the very successful G-7, only to find that the Fake News is still trying to perpetuate the phony story that I wanted to use Nuclear weapons to blow up hurricanes before they reach shore. This is so ridiculous, never happened!

“During each hurricane season, there always appear suggestions that one should simply use nuclear weapons to try and destroy the storms. Apart from the fact that this might not even alter the storm, this approach neglects the problem that the released radioactive fallout would fairly quickly move with the tradewinds to affect land areas and cause devastating environmental problems. Needless to say, this is not a good idea,” the NOAA says on its website.

Scientists once explored the idea of nuking a hurricane years ago.

In 1961, Francis W. Riechelderfer, the head of the U.S. Weather Bureau (now the National Weather Service), said that he could “imagine the possibility someday of exploding a nuclear bomb on a hurricane far at sea.”

During the G-7 summit in France, Trump said the Trump National Doral Resort in Florida is being considered as a possible venue.

While fielding questions from reporters during a press conference with Germany’s Chancellor Angela Merkel, Trump provided some insights into the progress his administration is at in looking for a venue for the next G-7 annual meeting.

“I don’t think there will be any surprises,” Trump said. “I’m not looking for surprises. I think we’ll have a very successful G-7. It’ll probably be in Miami, right next to the International Airport.”

When asked whether it will be held at his Doral Golf Resort, Trump responded saying that they’re “thinking about it” but have not made a final decision.