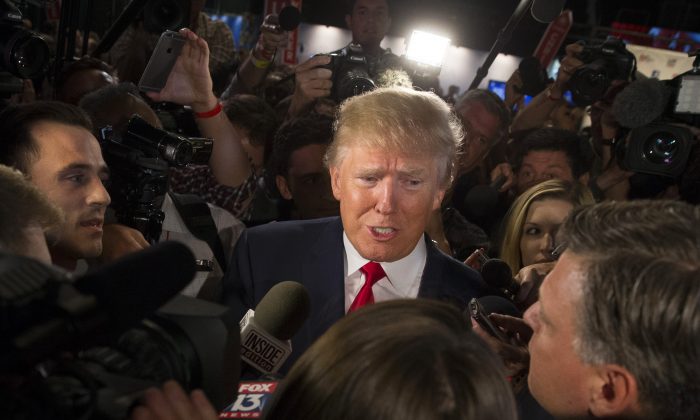 FILE- In this Aug. 6, 2015, file photo, Republican presidential candidate Donald Trump speaks to the media in the spin room after the first Republican presidential debate at the Quicken Loans Arena in Cleveland. Trump is showing no signs of curbing his battle with a Fox News television host, the Republican Party establishment and several presidential primary rivals who are accusing him of disrespecting women. (AP Photo/John Minchillo, File)
Politics

WASHINGTON— Donald Trump on Sunday resumed his running battle with a Fox News television host and Republican presidential rivals who accuse him of disrespecting women as he tried to make the case that a main challenger is the one in trouble with female voters.

The only woman in the GOP race said she believes woman are “horrified” by Trump’s offensive and that Trump may be unprepared for the pressure that comes with being president.

Trump’s unconventional, insurgent campaign has excited many anti-establishment conservatives while confounding party leaders already facing the prospects of a bruising fight among 17 candidates.

That remark cost Trump a prime-time speaking slot at the RedState Gathering, the Atlanta conference where several other presidential candidates spoke to about 1,000 conservative activists.

RedState host Erick Erickson said in a statement that Trump had violated basic standards of decency, even if his bluntness “resonates with a lot of people.” The Trump campaign retorted by calling Erickson a “total loser” who backs other “establishment losers.”

In the first of four interviews on the Sunday news shows, Trump stuck to his assertion that only “a deviant” would interpret his comment beyond a harmless barb, and dug in against Kelly and Erickson.

Jeb Bush, the presidential favorite for many top Republican donors, said at RedState that Trump’s bombast would hurt the GOP’s chances with women, who already tilt toward Democrats in presidential elections. “Do we want to win? Do we want to insult 53 percent of our voters?” the former Florida governor asked.

Trump contended on CBS’ “Face the Nation” that it’s Bush who has the problem with women, thanks to a comment Bush made that last week when discussing cutting off federal money for Planned Parenthood.

“I’m not sure we need half a billion dollars for women’s health issues,” Bush said. He later issued a statement saying he had misspoken and was referring only to the “hard-to-fathom $500 million in federal funding” for Planned Parenthood.

“I think he’s got a huge problem,” Trump said. He argued that it was worse than a video recording of 2012 GOP nominee Mitt Romney in which Romney said that 47 percent of voters were dependent on the government and would vote for President Barack Obama, no matter what.

Trump said he would be “very much up” on issue of women’s health” and “very much into the whole thing of helping people and helping women.”

Other candidates criticized Trump; some sought to avoid giving him more of their time.

Former Hewlett-Packard CEO Carly Fiorina, the only woman running for the GOP nomination, was among the first to speak out.

“I think women of all kinds are really sort of horrified by this,” she told CBS, saying there is a difference between being politically incorrect and “hurling personal insults at all kinds of people.”

She also suggested that Trump’s reaction was a sign that he is too thin-skinned. “If you think a question is tough, imagine the pressure of actually being in the Oval Office,” she said.

Florida Sen. Marco Rubio said he will let Trump answer for his own words.

“If I comment on everything he says, my whole campaign will be consumed by it,” Rubio told NBC’s “Meet the Press.”

“He says something every day,” Rubio said.

By Saturday evening, Trump’s campaign announced that he had fired a top consultant, Roger Stone. Stone said on Twitter that he had “fired Trump,” not the other way around.

According to an email obtained by the