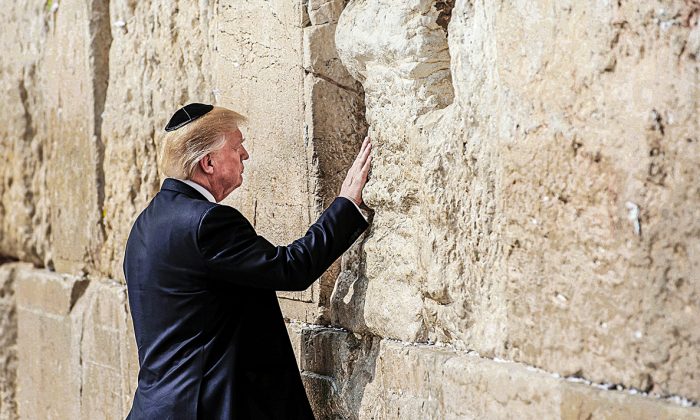 With quick visits to Riyadh, Jerusalem, and Bethlehem, President Donald Trump has reasserted American leadership in the Middle East and laid out an ambitious agenda to bring peace and stability to the region.

Trump used speeches to the Arab Islamic American summit in Riyadh on May 21, and to a gathering of Israeli notables at the Israel Museum in Jerusalem on May 23, to reset relations with the two closest U.S. allies in the region.

King Salman of Saudi Arabia praised Trump’s visit as a “turning point” in relations with the United States.

A turning point was needed because by the end of President Barack Obama’s time in office, relations with Riyadh had turned frosty. The king did not greet Obama at the airport when he visited Saudi Arabia in 2016.

At the Arab Islamic American summit on May 21, Trump addressed the leaders of 50 Muslim countries. The new course he charted for U.S. policy addresses terrorism and the U.S. stance toward Iran.

While Obama rarely spoke of terrorism, Trump used versions of the word “terror” 31 times in his address. More importantly, he challenged Muslim majority nations “to take the lead in combating radicalization.”

Trump attributed terror to an ideology, which he distinguished from the religion of Islam. In one of the more memorable lines of the speech, he said: “Terrorists do not worship God. They worship death.”

Obama’s Middle East policy was built around a rapprochement with Iran, which included a deal that critics say guarantees Iran will develop nuclear weapons.

Trump identified the leading state sponsor of terror as Iran, “a regime that is responsible for so much instability in the region.”

He called upon all “nations of conscience” to isolate Iran, deny it funding for terrorism, and “pray for the day when the Iranian people have the just and righteous government they deserve.”

The summit was clearly meant to help organize opposition to both Iran and terrorism. Toward the beginning of the speech, Trump said, “Our goal is a coalition of nations who share the aim of stamping out extremism and providing our children a hopeful future that does honor to God.”

In the weeks prior to his visit to Saudi Arabia, the Trump administration floated the idea of an Arab NATO—an alliance of Arab nations that, like NATO, would have a mutual self-defense pact.

According to the Middle Eastern newspaper al-Monitor, there have been discussions of a regional alliance that would include Saudi Arabia, Egypt, Jordan, the United Arab Emirates, Israel, and perhaps Kuwait that together would face off against Iran. The United States would not be part of the alliance but would offer patronage and support.

In his speech, Trump announced what is said to be the largest single arms deal in American history, selling $110 billion worth of high-tech weaponry to Saudi Arabia.

Trump announced two new institutions aimed at fighting terror, including a center for combating extremist ideology, to be opened in Saudi Arabia.

“An agreement to prevent the financing of terrorism, called the Terrorist Financing Targeting Center—co-chaired by the United States and Saudi Arabia, and joined by every member of the Gulf Cooperation Council” was signed at the summit.

A common reaction to Trump’s speech was that this was not the Trump seen on the campaign trail, who made several comments that offended Muslims.

Trump’s tone was inclusive, as he described the history, culture, physical beauty, and economic potential of the Middle East and spoke respectfully of Islam as one of the world’s great faiths.

Beyond the tone, though, Trump’s description of a foreign policy based on “principled realism” would have appealed to his audience, many of whom were not elected.

Trump did not mention “democracy” in the speech—he noted that he promised in his inaugural address that “America will not seek to impose our way of life on others”—and said his vision for those gathered together at the summit was one of peace, security, and prosperity.

According to Max Abrahms, professor of political science at Northeastern University, “When Trump goes to the Muslim world and says he is a realist, that is very welcome news” to national leaders. The United States, Abrahms points out, has had a history of trying to overthrow regimes that don’t share our ideology. Realism does not base policy on spreading an ideology.

Abrahms said the fact that Trump gave a speech in Saudi Arabia on countering terrorism was deeply ironic.

“The Saudis have a really bad record on financing terrorism and encouraging terrorist ideology,” Abrahms said.

ISIS has used Saudi educational materials in its caliphate. The 9/11 Commission reported that six Saudi officials provided financial help to al-Qaeda prior to the attack on the twin towers, although there was no evidence the government of Saudi Arabia did so.

Abrahms says he’s skeptical Saudi Arabia will give up its support of Salafist groups, which espouse a fundamentalist version of Sunni Islam and often preach jihad, or holy war.

Trump’s criticism of Iran in this context deepens the irony, according to Abrahms. Iran has been fighting organizations like al-Qaeda and other Salafist groups whose ambition is to attack the United States.

Iran does so because of deep sectarian differences—these groups are bitter enemies of the Shia faith.

Abrahms believes Trump’s speech used countering terrorism as a device for bringing together opposition to Iran.

Cooper believes these put pressure on the Saudis. Moreover, the threat Iran poses to the Gulf States “is a massive opportunity to recalibrate old thinking and just maybe come up with a new approach,” Cooper said.

If Trump’s visit leads to the taking down of Saudi financing and support for ideologies that support terror, “it will be a historic achievement.”

In Jerusalem, Trump won over Israelis who had become troubled about their nation’s relations with the United States under Obama.

The Times of Israel reports this scene from Trump’s speech at the Israel Museum:

“‘Iran’s leaders routinely call for Israel’s destruction,’ he said bleakly and bitterly, reading from the teleprompters. Then he departed from his prepared text, and added: ‘Not with Donald J. Trump, believe me.’

The remark was met with cheers and a standing ovation. Netanyahu, on his feet, pumped a fist.”

Later in his speech, Trump promised Iran would never get a nuclear weapon.

That same day, Trump became the first American president to pray at the Western Wall, one of the holiest sites in Judaism.

“Palestinians working through UNESCO have sought to rebrand this site as Muslim, trying to erase the link of the Jewish people to their heart,” Cooper said. “Trump going there wearing a yarmulke is a confirmation to all of the centrality and holiness of this area to the Jewish people. It will not long be forgotten.”

Trump expressed confidence during his time in Israel that the “big deal” of negotiating peace between the Israelis and the Palestinians could be achieved.

On his visit on May 23 to see Palestinian President Mahmoud Abbas in Bethlehem, Trump chastised him for the Palestinian practice of rewarding terrorists for attacking the Israelis. The night before, a terrorist had set off a bomb in Manchester, killing 22.

“It’s so interesting that our meeting took place on this very horrible morning of death to innocent young people,” Trump said. “Peace can never take root in an environment where violence is tolerated, funded, and even rewarded.”

Abbas has agreed to enter peace negotiations with the Israelis.