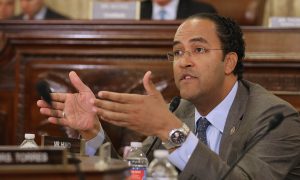 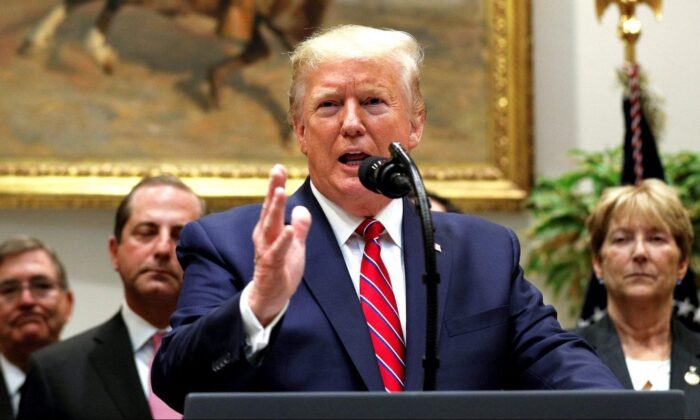 President Donald Trump delivers remarks on honesty and transparency in healthcare prices inside the Roosevelt Room at the White House in Washington, on Nov. 15, 2019. (Tom Brenner/Reuters)
Politics

Trump Responds to Sondland Testimony: ‘It’s All Over’

President Donald Trump stated on Wednesday he told U.S. Ambassador to the European Union Gordon Sondland he wanted no quid pro quo with Ukraine, which is the center of the House impeachment inquiry.

“I just noticed one thing and that would mean it’s all over,” Trump told reporters before reading from handwritten notes taken during Sondland’s testimony.

Sondland had testified about a conversation with the president where he asked about what Trump wanted from Kyiv.

Trump then said he “turned off the television” after hearing the ambassador’s statements. “I want nothing, I said it twice,” Trump said.

The president then blasted reporters, saying that “if you weren’t fake news, you would cover it properly.”

Trump disputed Sondland’s claim that he was in a bad mood on the phone call.

“I’m always in a good mood, I don’t know what that is,” he said, adding that he doesn’t know Sondland “very well.” He added, “I have not spoken to him much. This is not a man I know well. He seems like a nice guy though.”

Sondland, in the hearing, confirmed he never heard directly from Trump about a quid pro quo that connected military aid for Ukraine to investigations. But Sondland said that “we all understood” that a meeting at the White House for Ukraine’s president was conditioned on an investigation or a statement announcing investigations.

Impeachment Witch Hunt is now OVER! Ambassador Sondland asks U.S. President (me): “What do you want from Ukraine? I keep hearing all these different ideas & theories. What do you want? It was a very abrupt conversation. He was not in a good mood. He (the President) just said,”…

Earlier, Sondland said that “it was abundantly clear that there was a link” between the actions Ukraine desired and an announcement on investigations on behalf of Kyiv. He never specifically made a link to the military aid.

“Was there a quid pro quo?” Sondland rhetorically asked himself. “The answer is yes.”

When he was pressed by Republican lawmakers, Sondland admitted that no one had told him about investigations and relied only on presumptions that he had made.

Rep. Mike Turner (R-Ohio) asked about Sondland’s answers regarding the $400 million in military aid to Ukraine.

“After you testified, Chairman Schiff ran out and gave a press conference and said he gets to impeach the president of the United States because of your testimony,” Turner told Sondland. “If you pull up CNN today, right now their banner says, ‘Sondland ties Trump to withholding aid.’ Is that your testimony today, Ambassador Sondland? That you have evidence that Donald Trump tied the investigations to the aid? Because I don’t think you’re saying that.”

Sondland responded that he was “presuming” such allegations.

“No one told you?” Turner then asked him. “Not just the president, Giuliani didn’t tell you, Mulvaney didn’t tell you, nobody, Pompeo didn’t tell you? Nobody else on this planet told you that Donald Trump was tying aid to these investigations. Is that correct?”

To those questions, Sondland replied with “yes” and said he has no testimony “other than my own presumption.”

Trump, Ukrainian officials, and other White House officials have categorically denied the allegations of bribery and quid pro quo.