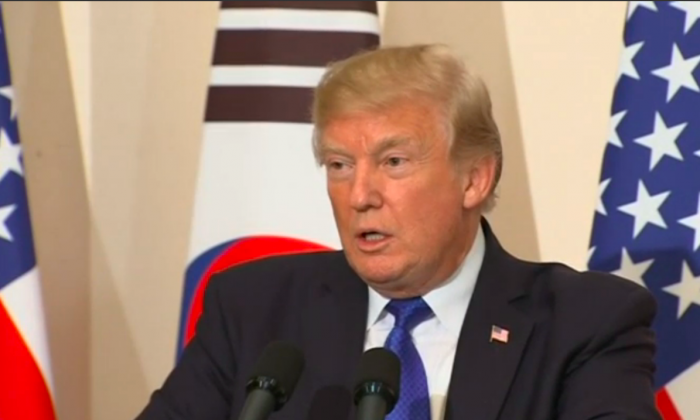 A reporter asked President Donald Trump a question about gun control on Tuesday, Nov. 7, while he was in South Korea, two days after a gunman killed 26 people in a Texas church.

“Well, you’re bringing up a situation that probably shouldn’t be discussed too much right now. We could let a little time go by, but it’s okay,” Trump replied.

The reporter asked if the extreme vetting Trump is doing on people trying to come into the United States should also apply to people who want to buy a gun.

“If you did what you’re suggesting, there would have been no difference three days ago, and you might not have had that very brave person who happened to have a gun or a rifle in his truck go out and shoot him, and hit him and neutralize him,” Trump said.

“And I can only say this: If he didn’t have a gun, instead of having 26 dead, you would have had hundreds more dead,” Trump continued. “So that’s the way I feel about it. Not going to help.”

The reporter then asked if Trump was willing to consider a change in gun control policy moving forward.

“I mean, you look at the city with the strongest gun laws in our nation, is Chicago, and Chicago is a disaster. It’s a total disaster,” Trump replied. “Just remember, if this man didn’t have a gun or rifle, you’d be talking about a much worse situation in the great state of Texas.”

Trump is a vocal defender of the Second Amendment, which states that “a well regulated Militia, being necessary to the security of a free state, the right of the people to keep and bear Arms, shall not be infringed.”

The good Samaritan who shot the Texas gunman, Stephen Willeford, is a former NRA instructor.

An autopsy later determined that Willeford shot the gunman twice.