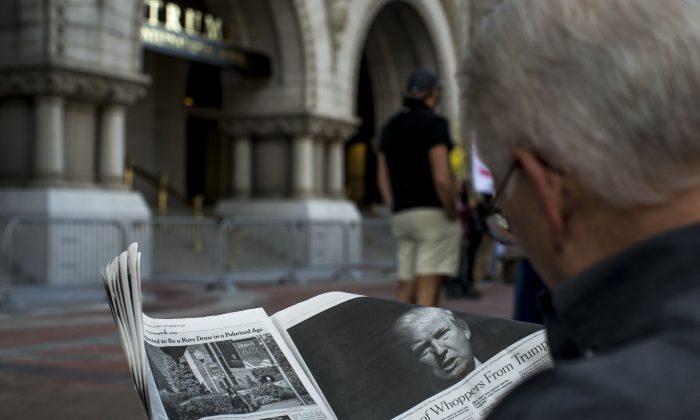 A man reads an article by The New York Times on Donald Trump during a protest outside the new Trump International Hotel at the old post office in Washington, D.C. on Oct. 26, 2016. (Gabriella Demczuk/Getty Images)
Politics

Donald Trump’s relationship with mainstream media outlets might remain frosty for some time.

“Wow, the @nytimes is losing thousands of subscribers because of their very poor and highly inaccurate coverage of the ‘Trump phenomena,'” he wrote on Twitter, likely in response to a letter sent out by Times publisher Arthur Ochs Sulzberger, Jr. to readers about “[rededicating] ourselves to the fundamental mission of Times journalism.”

In the letter over the weekend, Sulzberger and Dean Baquet, the Times executive editor, offered what appeared to be a mea culpa about the newspaper’s coverage of Trump’s candidacy for the president.

“You can rely on The New York Times to bring the same fairness, the same level of scrutiny, the same independence to our coverage of the new president and his team,” the letter read.

Trump acknowledged it directly on Sunday morning. “The @nytimes sent a letter to their subscribers apologizing for their BAD coverage of me. I wonder if it will change – doubt it?” he tweeted.

Two hours later, the president-elect refuted a claim in the Times saying he “believes ‘more countries should acquire nuclear weapons.'” He added: “How dishonest are they. I never said this!”

In a discussion with the New York Times on foreign policy and during a CNN town hall event, Trump said some countries—such as Japan, South Korea, and Saudi Arabia—could be better off if they had such weapons.

Back in August, Times reporter Jim Rutenberg suggested that in covering Trump, journalists “have to throw out the textbook American journalism has been using for the better part of the past half-century, if not longer, and approach it in a way you’ve never approached anything in your career.”

“Covering Mr. Trump as an abnormal and potentially dangerous candidate is more than just a shock to the journalistic system. It threatens to throw the advantage to his news conference-averse opponent, Hillary Clinton, who should draw plenty more tough-minded coverage herself,” he wrote. His piece, at the time, drew considerable backlash, mainly from Trump supporters.