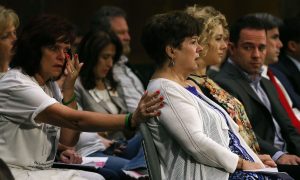 As Families Mourn the Loss of Loved Ones, They Fight Lax Immigration Policies
0 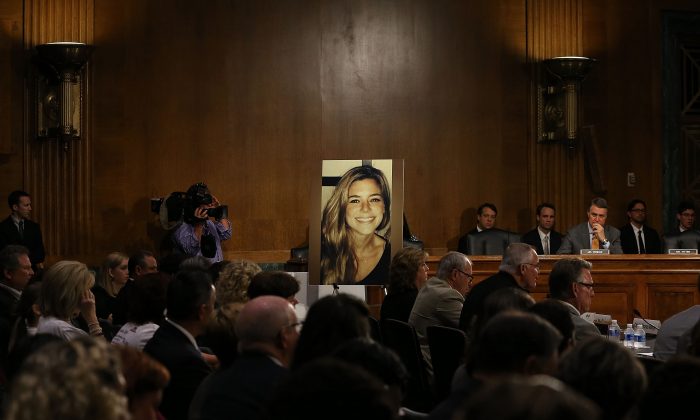 A photo of Kate Steinle is shown as her father Jim Steinle prepares to testify about her death during a Senate Judiciary Committee hearing on illegal immigration on Capitol Hill in Washington, on July 21, 2015. (Mark Wilson/Getty Images)
US News

Trump Responds to Not Guilty Verdict in Death of Kate Steinle

WASHINGTON—President Donald Trump vented his frustration on Twitter after illegal alien Jose Ines Garcia Zarate was acquitted of murder and manslaughter over the fatal shooting of Kate Steinle.

“A disgraceful verdict in the Kate Steinle case! No wonder the people of our Country are so angry with Illegal Immigration,” Trump tweeted Thursday night.

A disgraceful verdict in the Kate Steinle case! No wonder the people of our Country are so angry with Illegal Immigration.

Garcia Zarate fatally shot 32-year-old Steinle on a San Francisco pier in June 2015, as Steinle was walking with her father.

Garcia Zarate was detained in a San Francisco jail in March 2015 for an outstanding drug warrant. An ICE detainer request to local authorities was refused and he was released. He killed Steinle with a stolen gun in June.

The defense team argued that Garcia Zarate found the stolen weapon on the pier and that it accidentally fired, with the bullet ricocheting on the concrete and hitting Steinle.

The gun belonged to a Bureau of Land Management ranger that was stolen from a parked car a week earlier.

Prosecutors, however, claimed that he deliberately fired the gun at Steinle, and he was “playing his own secret version of Russian roulette.”

Garcia Zarate had previously been deported five times and was wanted by immigration authorities. Immigration and Customs Enforcement (ICE) had put a detainer on Garcia Zarate the last time he was in a San Francisco jail before the shooting.

A detainer is a request from ICE to hold an inmate for up to 48 hours longer so that ICE can take custody of the inmate and place them in deportation proceedings.

Early Friday morning, Trump continued tweeting, “The Kate Steinle killer came back and back over the weakly protected Obama border, always committing crimes and being violent, and yet this info was not used in court. His exoneration is a complete travesty of justice. BUILD THE WALL!”

The Kate Steinle killer came back and back over the weakly protected Obama border, always committing crimes and being violent, and yet this info was not used in court. His exoneration is a complete travesty of justice. BUILD THE WALL!

“The jury was not told the killer of Kate was a 7 time felon. The Schumer/Pelosi Democrats are so weak on Crime that they will pay a big price in the 2018 and 2020 Elections,” Trump tweeted.

“This tragedy could have been prevented if San Francisco had simply turned the alien over to ICE, as we requested, instead of releasing him back onto the streets,” Homan said in a statement on Nov. 30.

“It is unconscionable that politicians across this country continue to endanger the lives of Americans with sanctuary policies while ignoring the harm inflicted on their constituents.”

The jury was not told the killer of Kate was a 7 time felon. The Schumer/Pelosi Democrats are so weak on Crime that they will pay a big price in the 2018 and 2020 Elections.

Homan said after Garcia Zarate serves his sentence, ICE will work to take custody of him and deport him.

However, California passed a new sanctuary law on Oct. 5 that will make the whole state a sanctuary for illegal aliens. Senate Bill 54, is slated to take effect on Jan. 1, 2018, and forbids local and state law enforcement from communicating with immigration authorities about when an inmate will be released—except under special circumstances.

It is unclear if Garcia Zarate would fall under the special circumstances provision. Garcia Zarate’s sentence is likely to be between 16 months and three years in prison. Taking into account time already served, his remaining sentence will be short.

Homan said that as of July 31 this year, almost 10,000 criminal aliens who were released onto the streets—rather than being turned over to ICE—have committed another crime. He said the recidivism rate is as high as 75 percent, with more than half reoffending within the first year of being released from prison.

“Had San Francisco enforced our nation’s immigration laws, the Steinle family would be celebrating this holiday with all of their loved ones,” she said.

“It’s more important now than ever for Congress to secure our borders and provide the resources, including more ICE officers, needed to deport criminal illegal aliens and to finally stop sanctuary city policies that cause needless loss of innocent life,” Sanders said. “Politicians who fail to address these needs share responsibility for preventable crimes committed against innocent Americans.”

Proponents for sanctuary policies say that the policies promote trust in immigrant communities and, therefore, immigrants will come forward to report crimes—purportedly making the community safer.

Sessions countered that view, saying in Miami in August that no evidence supports the claim. “To the contrary, Chicago [a sanctuary city] has consistently had one of the lowest murder investigation clearance rates in the country,” Sessions said, adding that a suspect is identified in only one of every four murders.

“Far from making Chicago safer, these policies likely make cooperation with law enforcement more difficult. If there are no real consequences for the criminal, no witness will risk their life to report the crime. That means criminals walk free and victims suffer in silence,” he said on Aug. 16.