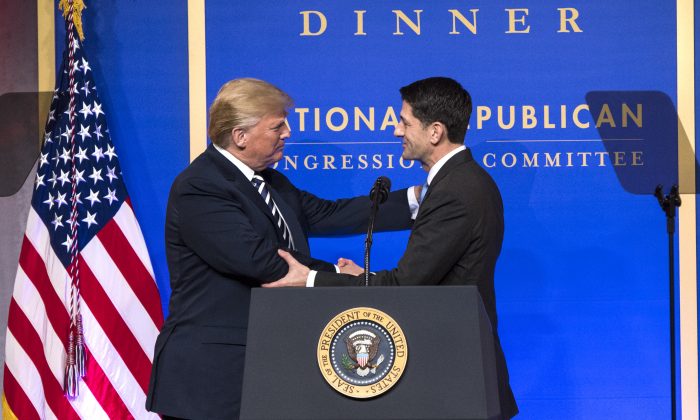 “Speaker Paul Ryan is a truly good man, and while he will not be seeking re-election, he will leave a legacy of achievement that nobody can question,” Trump wrote on Twitter. “We are with you Paul!”

Ryan (R-Wis.) announced on Wednesday that he won’t seek re-election in November. Ryan will retire in January after serving his full term, Fox News reported, citing a statement from his office.

“After nearly twenty years in the House, the speaker is proud of all that has been accomplished and is ready to devote more of his time to being a husband and a father. While he did not seek the position, he told his colleagues that serving as speaker has been the professional honor of his life, and he thanked them for the trust they placed in him,” Brendan Buck, counselor to the speaker, said in the statement.

Ryan was instrumental in passing Trump’s tax-reform bill, something the speaker had pushed for years. The new legislation will reduce the tax burden on Americans and companies by $5.5 trillion over the next decade.

Ryan was Mitt Romney’s running mate in the 2012 presidential election.

Over the years, Ryan has gained a reputation as an advocate for limited government and balanced budgets. He worked to repeal and replace Obamacare and passed several bills to dismantle it, the most significant of which failed in the Senate last year.

Ryan’s departure will open the House leadership seat. The frontrunners for the position are believed to be House Majority Whip Steve Scalise (R-La.) and GOP Majority Leader Kevin McCarthy (R-Calif.).

Ryan has been in Congress since 1999 and became the House speaker in 2015.