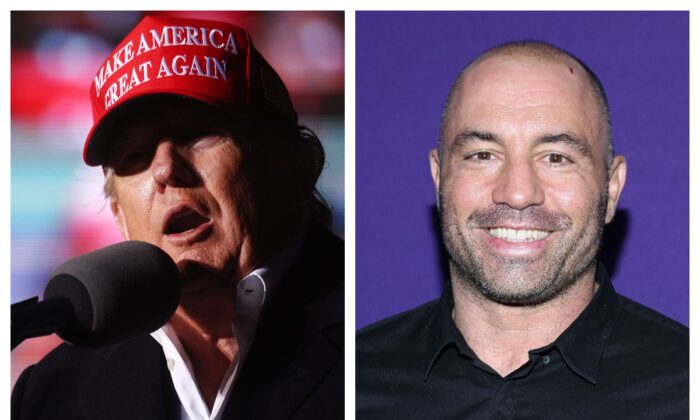 “Joe Rogan is an interesting and popular guy, but he’s got to stop apologizing to the Fake News and Radical Left maniacs and lunatics,” Trump said in his statement, published Monday. “How many ways can you say you’re sorry? Joe, just go about what you do so well and don’t let them make you look weak and frightened. That’s not you and it never will be!”

Rogan issued a response to claims that his show spread COVID-19 misinformation. However, he noted that two doctors interviewed on his show, cardiologist Peter McCullough and mRNA vaccine contributor Robert Malone, are highly credentialed individuals, and he also questioned what defines misinformation.

Meanwhile, over the past weekend, a heavily edited and out-of-context video surfaced online and was shared by several prominent social media users that showed Rogan saying the N-word. Rogan apologized over the footage, saying it was taken out of context and was compiled from about 12 years of podcasts.

“I think a lot of the legacy outlets and I think the left fear the fact that he can reach so many people, and so they’re out to destroy him,” DeSantis told news outlets. “But what I would say is don’t give an inch. Do not apologize. Do not kow to the mob. Stand up and tell them to pound sand; if you do that, there’s really nothing that they’re able to do to you. The only way they have power is if you let them get your goat.”

The public pressure campaign against Rogan started with singer-songwriter Neil Young demanding that either Spotify remove his music or Rogan’s podcast. Several days later, a Spotify spokesperson confirmed the streaming service would remove Young’s music before several others, including Joni Mitchell, said they would also withdraw their songs.

Company CEO Daniel Ek on Sunday said that the company has removed more than 100 Rogan podcast episodes but said the firm won’t attempt to silence him.

“We should have clear lines around content and take action when they are crossed, but canceling voices is a slippery slope. Looking at the issue more broadly, it’s critical thinking and open debate that powers real and necessary progress.”