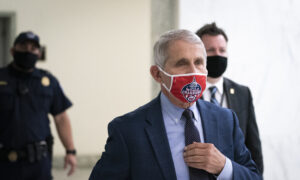 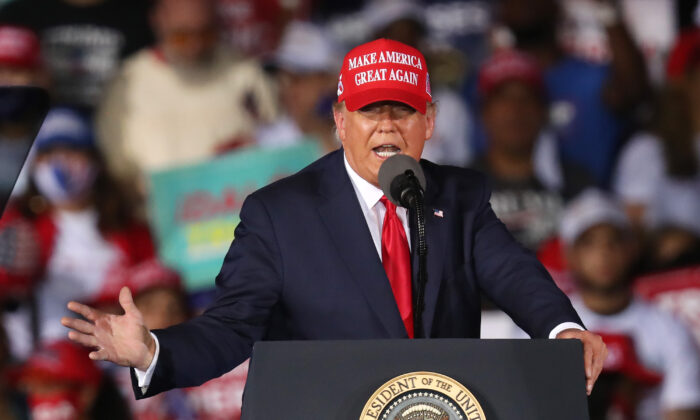 Trump Responds to Chants to Fire Fauci by Urging Patience

President Donald Trump early Monday told supporters he appreciated their advice to fire Dr. Anthony Fauci, considered by many as one of the nation’s top infectious disease experts.

Trump during a rally in Florida criticized media outlets for their reporting on the COVID-19 pandemic, prompting loud chants of “fire Fauci.”

“No, he’s been wrong, though, a lot. He’s a nice man, though. He’s been wrong on a lot. ‘Do not, under any circumstances, wear a mask,’ he said. ‘Do not close up to China,’ he said. Then he said later on that ‘Trump—President Trump—saved tens of thousands of lives’ because I closed early.”

Fauci, the head of the National Institute of Allergy and Infectious Diseases, part of the federal government, was among the federal health experts who early this year repeatedly exhorted people not to wear masks.

The experts abruptly changed course in April, citing studies they said showed people who have COVID-19, the disease caused by the CCP (Chinese Communist Party) virus, could spread the virus even if they weren’t showing symptoms.

Fauci later suggested experts knew masks could be effective in preventing spread of the virus but told the public not to wear them because of concerns over the supply of face coverings.

“I don’t regret anything I said then because in the context of the time in which I said it, it was correct. We were told in our task force meetings that we have a serious problem with the lack of PPEs and masks for the health providers who are putting themselves in harm’s way every day to take care of sick people,” he told “CBS Evening News” over the summer.

“When it became clear that the infection could be spread by asymptomatic carriers who don’t know they’re infected, that made it very clear that we had to strongly recommend masks.”

Trump during the rally was also referring to how in late January he ordered most travel from China halted to try to prevent transmission of the CCP virus.

Democratic presidential nominee Joe Biden called Trump “xenophobic” the day after the decision, though he later insisted he was not referring to the move.

Once a fixture at daily briefings on the federal response to the pandemic, Fauci has regularly appeared at odds with Trump. Fauci frequently appears on cable news and other outlets to talk about COVID-19 and has spoken negatively about the Trump administration’s response to the health crisis.

The National Institute of Allergy and Infectious Diseases hasn’t responded to requests for comment.

Fauci last week claimed the United States is “in for a whole lot of hurt” in the coming months, adding: “It’s not a good situation. All the stars are aligned in the wrong place as you go into the fall and winter season, with people congregating at home indoors. You could not possibly be positioned more poorly.”

He also said Biden’s campaign is taking the pandemic “seriously from a public health perspective” while Trump is “looking at it from a different perspective,” from the standpoint of “the economy and reopening the country.”

The White House criticized the comments, describing them as playing politics.

“It’s unacceptable and breaking with all norms for Dr. Fauci, a senior member of the president’s Coronavirus Task Force and someone who has praised President Trump’s actions throughout this pandemic, to choose three days before an election to play politics,” White House deputy press secretary Judd Deere told news outlets in a statement. “As a member of the Task Force, Dr. Fauci has a duty to express concerns or push for a change in strategy, but he’s not done that.”