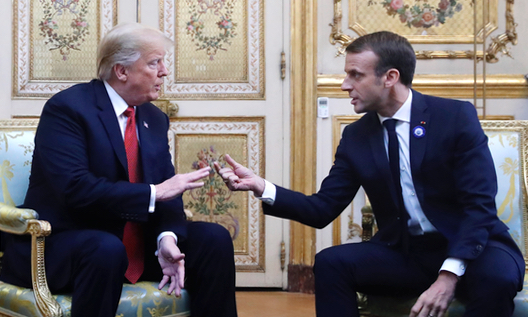 President Donald Trump criticized French President Emmanuel Macron on Nov. 13, in response to comments made by Macron during a weekend of events commemorating the 100th anniversary of the end of World War I.

Macron suggested in a speech in Paris that Europe should build an army to protect against China, Russia, and the United States. The French president also suggested, in an apparent swipe at Trump, that nationalism is a “betrayal of patriotism.”

“Emmanuel Macron suggests building its own army to protect Europe against the United States, China, and Russia. But it was Germany in World Wars One & Two – How did that work out for France? They were starting to learn German in Paris before the U.S. came along. Pay for NATO or not!” Trump wrote on Twitter.

Emmanuel Macron suggests building its own army to protect Europe against the U.S., China and Russia. But it was Germany in World Wars One & Two – How did that work out for France? They were starting to learn German in Paris before the U.S. came along. Pay for NATO or not!

The United States, France, and Germany are military allies under the North Atlantic Treaty Organization (NATO). Washington contributed more than one-third of the total funding to the 29-member alliance in 2017. Trump has pressured member states to meet the funding goal of 2 percent of each nation’s gross domestic product, but only the United Kingdom, Estonia, and Greece met that goal last year.

Considering that nationalism and patriotism are synonyms in the English language, Macron’s comments were an obvious jab at the U.S. president, who recently called himself a nationalist.

Macron’s attack appears to be an intentional misinterpretation of comments Trump made at a campaign rally in North Carolina on Oct. 26.

“I’m a nationalist,” Trump said. “I’m for us. And you know what? We’re going to help the globe. But we have to help ourselves as well.”

Trump shot back at Macron, suggesting that France’s leader used the criticism to draw attention away from his low approval ratings and France’s high unemployment rate. According to a poll conducted by Kantar Public, only 26 percent of French people approve of Macron’s job performance. Unemployment in France stood at 9.1 percent in the second quarter.

In comparison, the unemployment rate in the United States reached a decades-low 3.7 percent in October. Trump’s approval rating, despite overwhelmingly negative media coverage, stood at 46 percent on Nov. 13, according to Rasmussen, the polling company that most accurately predicted Trump’s victory in 2016.

“By the way, there is no country more Nationalist than France, very proud people-and rightfully so!” Trump wrote. “MAKE FRANCE GREAT AGAIN!”

Trump appeals to nationalism as a force to counter globalism, an ideology that he promised to oppose when he campaigned for president in 2016. Trump promised voters to end decades of unfair treatment of the United States on the global stage.

“On Trade, France makes excellent wine, but so does the U.S. The problem is that France makes it very hard for the U.S. to sell its wines into France, and charges big Tariffs, whereas the U.S. makes it easy for French wines, and charges very small Tariffs. Not fair, must change!” Trump wrote.

According to the Wine Institute, the European Union levies tariffs that range from 11 to 29 cents per bottle of U.S. wine. That is more than twice the U.S. tariffs on French wine, which are 5 cents per bottle on still wine and 14 cents for sparkling wine.

Trump canceled a military parade in Washington and opted to travel to France for the centennial events.