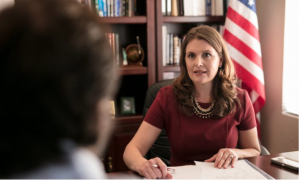 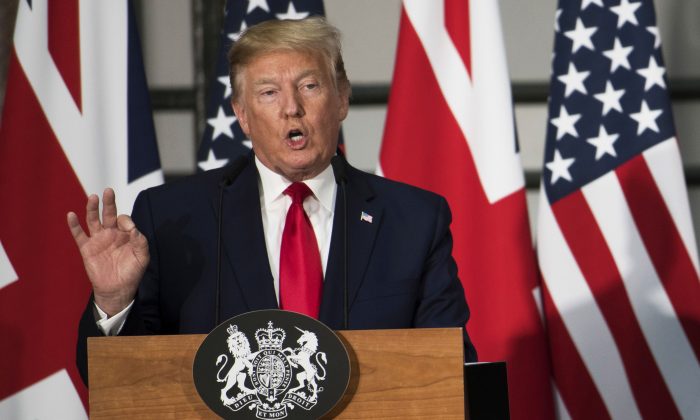 Trump: Republicans Would be Foolish to Try Blocking Tariffs on Mexico

President Donald Trump dismissed a report that some Republican lawmakers are discussing an action to block him from imposing tariffs on Mexican imports.

“I don’t think they will do that. I think if they do, it’s foolish,” he said during a joint press conference with UK Prime Minister Theresa May in London on June 4.

Trump announced on May 30 that, effective June 10, he will place a 5 percent tariff on goods coming from Mexico, “until such time as illegal migrants coming through Mexico, and into our Country, STOP.”

On June 10th, the United States will impose a 5% Tariff on all goods coming into our Country from Mexico, until such time as illegal migrants coming through Mexico, and into our Country, STOP. The Tariff will gradually increase until the Illegal Immigration problem is remedied,..

The tariff will go up by an additional 5 percentage points each month up until reaching 25 percent and stay there until the problem is resolved.

Some Republican senators have spoken against the tariffs, including John Cornyn of Texas, Joni Ernst of Iowa, and Pat Toomey of Pennsylvania.

“The president is right to point out the crisis at our southern border,” Toomey said in a May 31 statement. “However, a blanket tax increase on everything Americans purchase from Mexico is the wrong remedy.”

Some lawmakers have started discussions about whether to pass a resolution against Trump’s declaration of national emergency, which would take away the authority Trump uses to impose the tariffs, unnamed sources told The Washington Post.

But Trump pointed to his approval among Republicans, a significant part of which stems from his hard stance on securing the southern border, as a deterrent to Republican dissent.

“There’s nothing more important than borders,” he said. “I’ve had tremendous Republican support.”

The latest YouGov poll from May 26 to 28, before the Mexico tariff announcement, had Trump at 87 percent job approval among Republicans, 85 percent specifically on his handling of immigration (pdf).

Even if some Republicans would break with Trump to reverse his emergency declaration, it would take all the Democrats and Independents and 20 Republicans in the Senate to override Trump’s veto, which he would likely issue.

Trump declared the national emergency on Feb. 15, citing a humanitarian and national security crisis at the border, prominently due to the influx of illegal immigrants from El Salvador, Honduras, and Guatemala, whose numbers have been overwhelming U.S. border security.

The declaration enabled him to transfer $3.6 billion from the military budget toward construction of a steel slats barrier along the border, though on May 24, a federal judge temporarily blocked $1 billion of those funds.

Border Patrol apprehensions of illegal border crossers have increased nearly 120 percent in the first seven months of the fiscal year 2019, compared with the same period the year before.

The migrants have been traveling largely unimpeded through Mexico, sometimes in caravans of thousands of people. They commonly pay hundreds or even thousands of dollars to human traffickers—dubbed coyotes—who are associated with the drug cartels that control the smuggling routes on the Mexican side of the border.

Trump said Mexico can stop the migrant flow “very quickly” and needs to “step up.”

It’s also sending a delegation that will meet with Secretary of State Mike Pompeo and others on June 5 to discuss the issue.

Trump, however, indicated he wants to see substantive results.

“Mexico is sending a big delegation to talk about the Border. Problem is, they’ve been ‘talking’ for 25 years,” he said in a June 2 tweet. “We want action, not talk. They could solve the Border Crisis in one day if they so desired. Otherwise, our companies and jobs are coming back to the USA!”

Mexico is sending a big delegation to talk about the Border. Problem is, they’ve been “talking” for 25 years. We want action, not talk. They could solve the Border Crisis in one day if they so desired. Otherwise, our companies and jobs are coming back to the USA!

While opponents of the tariffs predict they would just bump up the cost of Mexican products, such as car parts and machinery, Trump predicts that manufacturers will move production to the United States to avoid the tariffs.

At the June 4 press conference, he chilled prospects that the first round of talks could make him reverse course.