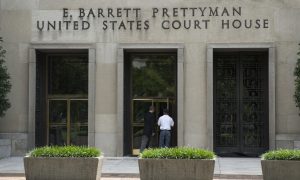 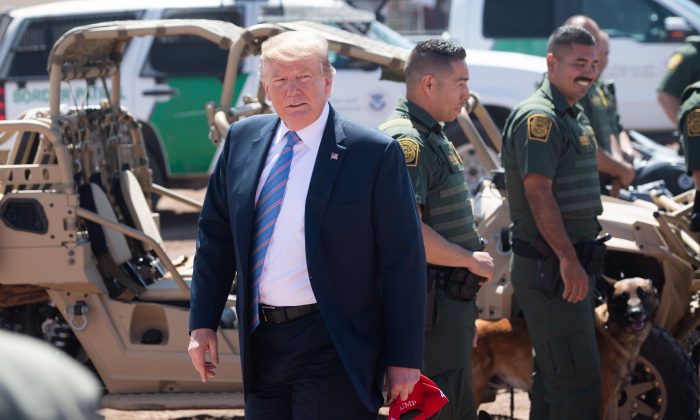 President Donald Trump criticized what he said were erroneous reports saying that a portion of the U.S.-Mexico border wall fell over last month.

Trump said on Sunday that reports claiming that a section of the border wall toppled over are misleading, suggesting that these outlets used misleading headlines to “make it sound terrible.”

Some news outlets last month showed photos of a California section of the wall had fallen over and landed on trees on Mexico’s side.

Trump said “the real reason” why the wall fell was because its “concrete foundation was just poured [and] was soaking wet when big winds kicked in.”

Last week the Fake News said that a section of our powerful, under construction, Southern Border Wall “fell over”, trying to make it sound terrible, except the reason was that the concrete foundation was just poured & soaking wet when big winds kicked in. Quickly fixed “forever”.

Border Patrol Agent Carlos Pitones of the El Centro, California, sector confirmed to CNN at the time that the wall section was recently set in concrete when a storm rolled through the area with high winds. The National Weather Service reported at the time that winds in the area gusted as high as 37 mph.

In his statement, Trump said the portion of the wall in the El Centro sector was “quickly fixed,” adding that it will last “forever.”

It comes after $3.8 billion in funding from the Air Force and Navy was reappointed to border wall construction, Pentagon officials confirmed last week. That would allow for the construction of about 177 miles of barrier along the southern border.

“DHS has identified areas along the southern border of the United States that are being used by individuals, groups, and transnational criminal organizations as drug smuggling corridors, and determined that the construction of additional physical barriers and roads in the vicinity of the United States border is necessary in order to impede and deny drug smuggling activities,” reads the request, signed by acting Defense Department comptroller Elaine McCusker.

The border wall was one of Trump’s 2016 signature campaign promises. However, over the past three years, his administration has hit a number of roadblocks in the courts and in Congress.

In January, a court ruled that Trump could use funds to construct the wall.