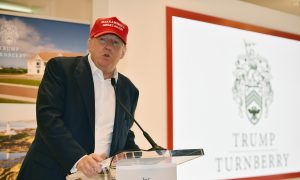 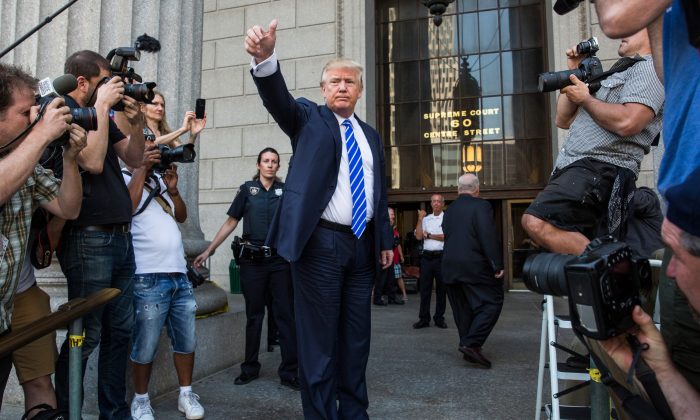 Trump shook hands and fist-bumped bystanders as he reported for jury duty at a Manhattan court, arriving in a limousine. Flanked by a crush of cameras and reporters as he walked up the courthouse steps — and paused to wave at the top — Trump waited in a security line before going to the jury room, where he was greeted with murmurs from the 75 or more potential jurors.

Asked whether he would seek to be excused, he said only, “It will be interesting.”

Trump Wants Money From Mideast Countries Supported by US

A court officer escorted him to a seat in the front row, and court officers’ union President Dennis Quirk said a special team of uniformed and plainclothes officers was brought in to help handle the media presence while ensuring all regular posts were covered. Quirk said that was standard for any high-profile person.

Accompanied by an unarmed private security guard, Trump arrived in time to catch the end of an instructional video about jury duty basics, and he filled out a juror questionnaire asking about biographical basics, occupation, hobbies, experiences with crime and courts and whether the prospective juror is “actively involved in any civil, social, union, professional or other organizations.”

Jury assembly supervisor Irene Laracuenta told the possible jurors that their commitment would be either one day or one civil trial, depending on whether they were selected.

“No one — no one — gets special treatment,” Laracuenta said.

If Trump isn’t picked for a jury by the end of Monday, he’s exempt from jury duty for the next six years. Jurors who do get chosen are told to expect to sit for at least one week, but trials can last for months.

Four uniformed court officers guarded the entranceway to a hallway as Trump used a 20-minute midmorning break to talk on his phone in the hall. He took a selfie with an attorney he encountered and signed a sketch artist’s drawing as he headed back into the jury assembly room, with a bystander exhorting him to “save this country!”

Trump sat silently as the morning stretched on. When the prospective jurors were dismissed for a lunch break, he left in his limo, to shouted questions from reporters and some boos from onlookers.

The GOP front-runner said last week he was “looking forward to appearing” for jury duty. The real estate mogul and reality TV star has been called previously but didn’t appear; a spokesman has said Trump never got the summonses because they had been sent to the wrong address.

Over the years, many celebrities — including Madonna, Spike Lee, and Woody Allen — have been called for jury duty in New York City. Indeed, “Saturday Night Live” cast member Bobby Moynihan was in the jury pool with Trump on Monday.

While it was once de rigeur for doctors, lawyers, various other professionals and elected officials to get out of jury duty, the state eliminated their exemptions in 1996.

Former mayors Michael Bloomberg and Rudolph Giuliani both were called while in office; Giuliani actually served as foreman on a civil personal-injury case. Former President Bill Clinton was seriously considered, though he didn’t actually have to appear, for an attempted murder case in Manhattan federal court in 2003.