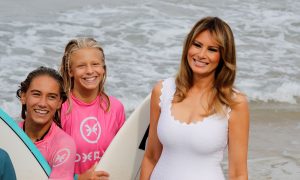 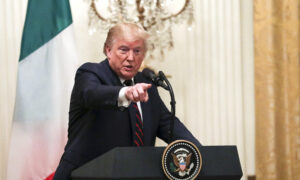 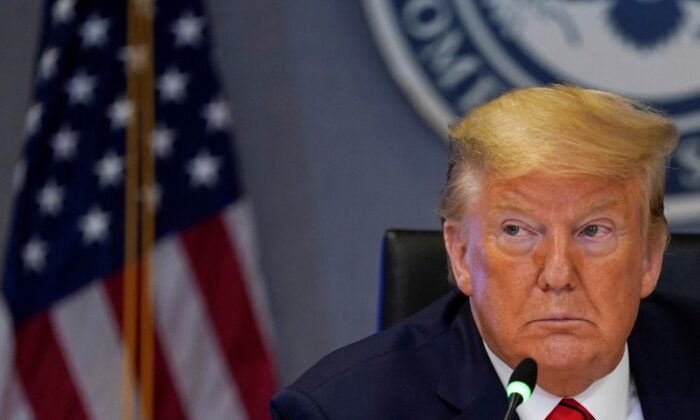 President Donald Trump attends a teleconference with governors to discuss partnerships to "prepare, mitigate, and respond to COVID-19" at the headquarters of the Federal Emergency Management Agency in Washington on March 19, 2020. (Evan Vucci/Pool via Reuters)
Trump Presidency

President Donald Trump has replaced an in-person meeting of the Group of Seven (G-7) leaders at Camp David in June with a video conference due to the growing pandemic, the White House announced on March 19.

The gathering of world leaders at the G-7 summit is the latest in a string of high-profile events to be postponed or cancelled due to mounting fears of the rapidly spreading CCP virus, which has claimed the lives of at least 200 Americans.

The decision comes as nations around the world seal their borders and ban travel to stop the virus’s spread.

White House spokesman Judd Deere said the decision was made “in order for each country to focus all of its resources on responding to the health and economic challenges of COVID-19.”

White House economic adviser Larry Kudlow, who also serves as Trump’s G-7 “sherpa,” has informed his counterparts about the move.

“At President Trump’s direction, National Economic Council Director and U.S. Sherpa for the 2020 G-7 Larry Kudlow has informed his Sherpa colleagues that the G-7 Leaders’ Summit the U.S. was set to host in June at Camp David will now be done by video teleconference,” Deere said in a statement.

“The White House also informed the other G-7 members that in order to continue close coordination, the president will convene the Leaders’ Summit via video teleconference in April and May just as he did this week,” he said.

G-7 meetings, which take place annually, consist of leaders from the United States, the United Kingdom, France, Germany, Canada, Japan, and Italy. This year’s summit had been scheduled to take at the presidential retreat in Maryland in June.

Trump held a video conference with the leaders of the world’s major industrialized countries on Monday and plans to repeat that in April, May, and June, in a bid to halt transmission of the CCP virus.

“By acting together, we will work to resolve the health and economic risks caused by the COVID-19 pandemic and set the stage for a strong recovery of strong, sustainable economic growth and prosperity,” the G-7 leaders wrote in a joint statement after Monday’s video conference.

Several G-7 nations, including Italy and Germany, have shut their borders amid the escalating pandemic. On Thursday the toll from an outbreak of COVID-19 in Italy rose by 427 to 3,405.

Over 13,000 people across the United States have been diagnosed with COVID-19 and 200 have died, with the largest numbers so far in Washington state and New York.