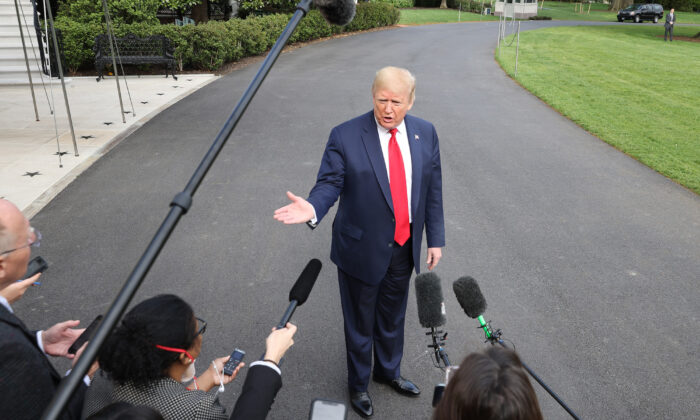 President Donald Trump talks to journalists on the South Lawn while departing the White House on May 1, 2020. (Chip Somodevilla/Getty Images)
AMERICA

Trump Refutes Report That 3,000 Will Die per Day in June

President Donald Trump rebuked a report that claims that about 3,000 will die from the CCP virus per day by June 1, saying it was based on an internal document that didn’t include mitigation efforts.

“There remains a large number of counties whose burden continues to grow,” the Centers for Disease Control and Prevention (CDC) warned in the New York Times report.

Trump told reporters on May 5 that he isn’t concerned about states reopening their economies too quickly “because that [report] assumes no mitigation. We’re doing mitigation.”

“We won’t be going into stadiums full bore yet, you know, for events and soccer and football and all of the different events—baseball. I hope baseball can get going. But they won’t be going in full bore yet. At some point, hopefully in the not-too-distant future. But that report is a no-mitigation report, and we are mitigating.”

Meanwhile, the Institute for Health Metrics and Evaluation at the University of Washington is now estimating that there will be about 135,000 total deaths in the United States through the start of August. Currently, the United States has recorded about 71,000 deaths from the CCP (Chinese Communist Party) virus, a novel coronavirus that emerged last year in Wuhan, China.

According to the institute, the death figures reflect the “rising mobility in most U.S. states as well as the easing of social distancing measures expected in 31 states by May 11, indicating that growing contacts among people will promote transmission of the coronavirus.”

White House spokesman Judd Deere on May 4 also dismissed the New York Times article and noted that it cited a document that isn’t an official White House document.

What’s more, he wrote on Twitter, the document hasn’t “been presented to the task force or gone through interagency vetting. This data is not reflective of any of the modeling done by the Coronavirus Task Force or data that the task force has analyzed.”

Deere wrote that the White House’s phased plans to reopen the economy are based on data and are scientifically driven.

“The health of the American people remains President Trump’s top priority and that will continue as we monitor the efforts by states to ease restrictions,” he said, adding that the reopening measures are under the guidance of the “top health and infectious disease experts in the federal government.”

A number of states are working to allow some businesses to reopen as significant economic losses mount, and more than 20 million Americans have filed for unemployment benefits over the past two months. The governors of some states have also warned that critical services will be cut amid budget shortfalls caused by the pandemic.