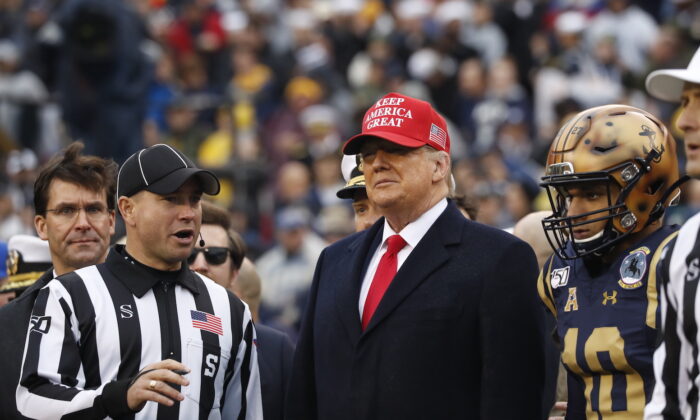 President Donald Trump waits for the coin toss before the start of the Army-Navy college football game in Philadelphia on Dec. 14, 2019. (Jacquelyn Martin/AP)
Trump Presidency

President Donald Trump was introduced during the Army vs. Navy college football game on Saturday to provide the coin toss, and he received applause from the crowd.

“Good afternoon and welcome, special guests, dignitaries … captains, please introduce yourselves,” the referee said before the coin toss. “We’re gathered here for the coin toss, it’s obviously with great pride and honor to welcome our commander-in-chief, our president of the United States, President Donald J. Trump,” he added, leading to cheers.

Trump later stopped at the locker rooms of Army Black Knights and the Navy Midshipmen, telling them that their service could be delayed so they could be drafted for an NFL team.

He was flanked by Defense Secretary Mark Esper, who told them that players from the service academies will have a waiver if they want to play professional sports, according to the report.

Esper announced to the players that now, “any cadet who graduates and has the opportunity to play professional sports will be able to do so and serve his country after he’s done playing pro sports.”

“So what we’re doing now is you’ll go out and you’ll make a fortune,” Trump said, Fox News reported. “And after you are all finished with your professional career, you’ll go and you’ll serve. And everybody’s thrilled.”

During the game, crowds broke out into chants of “Trump” and “commander in chief.” Trump started the game on the Army side of the field, but during halftime, he crossed the field to the Navy side to not show any bias, according to Fox. When he left, crowds chanted: “We love you!”

He was joined by Esper, Army Secretary Ryan McCarthy, and Chairman of the Joint Chiefs of Staff Mark Milley.

After the game, Trump was given the game ball by Navy parachuters.

It’s the fourth sporting event Trump has attended this year. He went to a Washington Nationals World Series game in Washington, D.C., and received boos. Weeks later, he attended a UFC event in New York City and received mostly cheers. Trump’s son, Donald Trump Jr., criticized media reports that focused primarily on the boos: “Despite the [expletive] from blue checkmark Twitter, when we walked into the arena it was overwhelmingly positive.”

The president and First Lady Melania Trump attended University of Alabama-Louisiana State University in November, where he received enthusiastic cheers from the crowd. “USA! USA! USA!” is what the crowd chanted when the cameras pointed at the Trumps, according to video footage.