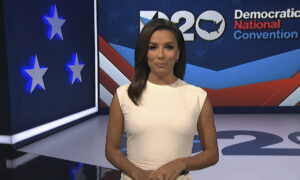 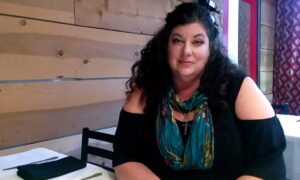 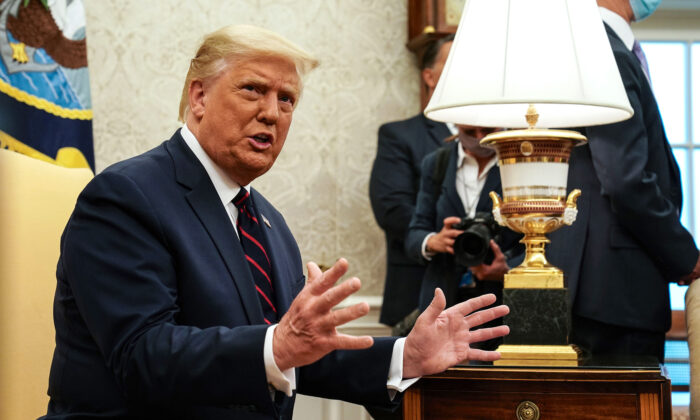 President Donald Trump talks to reporters during a meeting with Iraqi Prime Minister Mustafa Al-Kadhimi in the Oval Office at the White House on Aug. 20, 2020. (Anna Moneymaker-Pool/Getty Images)
Donald Trump

He made the remarks on Friday at the 2020 Council for National Policy Meeting.

Biden, who served for 36 years as a U.S. Senator and 8 years as vice president under former President Barack Obama, alleged that America is in a gloomy situation under Trump’s presidency.

“The current president has cloaked America in darkness for much too long. Too much anger. Too much fear. Too much division,” he said during his acceptance speech on Thursday.

The former vice president grounded his rhetoric on four main events which he described as “a perfect storm”: the CCP (Chinese Communist Party) virus pandemic and its economic aftermath, racial tensions in big cities around the country, and climate change.

“Four historic crises. All at the same time. A perfect storm,” he said. “The worst pandemic in over 100 years. The worst economic crisis since the Great Depression. The most compelling call for racial justice since the 60s. And the undeniable realities and accelerating threats of climate change.”

Trump touted his economic accomplishments before the outbreak and said the economy will have a “super V” recovery from the economic aftermath of the plague.

He also praised the responses from healthcare workers, the legislative branch, and businesses to deal with the plague.

The president—who is apparently gaining strong support from law enforcement departments around the country amid a wave of protests and riots after the death of George Floyd and discussion of defunding the police—criticized Biden for not talking about law enforcement and reducing crime in Democrat-run cities.

In response to the climate change crisis mentioned by Biden, Trump emphasized how he has released the potentials of the United States energy sector through deregulation and withdrawal from the Paris Climate Accord since he came to the White House.

“It was the most successful period of time in the history of our country, from every standard,” he said.

Posing as a moderate Democrat, Biden proposed an economic plan with apparent overlap with Trump’s. However, Democrats and Republicans show a sharp divergence in various policies.

The Democrats lean toward shutting down states or localities as long as necessary to control the spread of the CCP virus outbreak, while Trump and other Republicans want a balance between the handling of the plague and economic health.

House Speaker Nancy Pelosi (D-Calif.) has ordered the Democrat-controlled House to legislate mostly via proxy voting since May. Biden told ABC‘s David Muir that he will shut down the country if scientists suggest so.

However, Trump is a strong supporter of police officers. He took actions along with his attorney general William Barr and acting homeland secretary Chad Wolf to restore “law and order.”