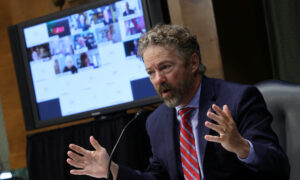 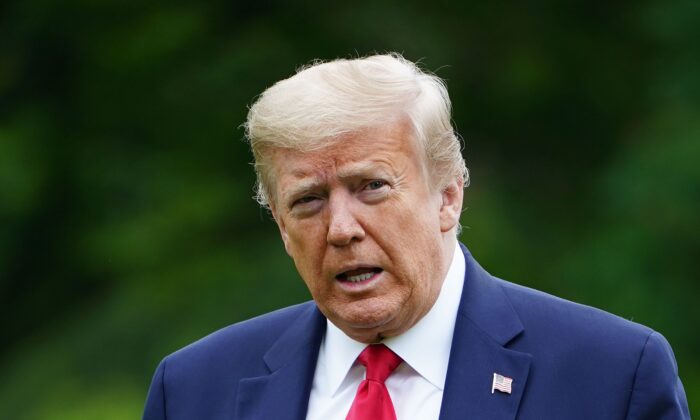 President Donald Trump walks across the South Lawn upon return to the White House on May 17, 2020. (Mandel Ngan/AFP/Getty Images)
Politics

Trump was asked by a reporter after returning to the White House from Camp David on May 17 what he thought of Obama’s apparent suggestion, during a virtual speech on May 16, that many in the current administration “aren’t even pretending to be in charge.”

The president began by saying he had just returned from a “working weekend” and that “tremendous progress is being made on many fronts, including coming up with a cure for this horrible plague that has beset our country.”

Pressed again for a response, he said he hadn’t heard Obama’s comment, and when asked a third time, Trump said: “Look, he was an incompetent president, that’s all I can say. Grossly incompetent.”

Obama on May 16 commented on the administration’s handling of the pandemic, accusing the country’s leadership of being irresponsible and disorganized.

“More than anything, this pandemic has fully, finally, torn back the curtain on the idea that so many of the folks in charge know what they’re doing,” Obama said in a virtual commencement speech to historically black colleges and universities. “A lot of them aren’t even pretending to be in charge.”

While Democrats have repeatedly criticized Trump’s response to the outbreak of COVID-19, Obama has rarely come out to speak in public. Earlier this month, however, Obama was reported by multiple outlets as saying in a private call to supporters that the Trump administration’s pandemic response has been “an absolute chaotic disaster.”

“Doing what feels good, what’s convenient, what’s easy—that’s how little kids think. Unfortunately, a lot of so-called grown-ups, including some with fancy titles and important jobs, still think that way—which is why things are so screwed up,” Obama said on May 16. “I hope that instead, you decide to ground yourself in values that last, like honesty, hard work, responsibility, fairness, generosity, respect for others.”

Karl Rove, a Republican strategist and deputy chief of staff during the administration of George W. Bush, told Fox & Friends on May 17 that Obama’s comments on May 16 amounted to a “political drive-by shooting.”

“It is so unseemly for a former president to take the virtual commencement ceremony for a series of historically black colleges and universities and turn it into a political drive-by shooting,” Rove told Fox News.

“This is a moment where these young graduates that could be inspired to a life of service—to recognize that life is going to bring challenges, and how we handle the challenges is going to demonstrate our character—there are lots of positive messages that the former president could have delivered,” Rove said.

“He has slandered, you know, not just the president, who’s his political target—and he made it clear a week ago he was going to go after him,” Rove said, interpreting the intent behind Obama’s leaked phone call, “but he’s taking a slap at the vice president, who has done an extraordinarily effective job as the head of the coronavirus task force, Dr. Fauci, Dr. Birx, Secretary Azar, Director Collins, all of the army that put up that hospital in the Javits Center, the Navy that sent its ships to Los Angeles and New York, all of these people in charge of responding to this—he’s now finally said they don’t know what they’re doing.”

Deaths in the United States due to the pandemic are nearing 90,000, according to a Johns Hopkins tally, while the number of infections is more than 1.4 million.

During a May 17 interview on CNN’s “State of the Union,” Health and Human Services Secretary Alex Azar defended the administration’s response to the outbreak, highlighting that the United States has conducted 10 million tests over the last several months.

“Thanks to the president’s historic response efforts here and the collaborative work of governors and heroic health care workers on the front lines, we are in a position to reopen,” Azar said.