Trump Reaffirms Pledge to End HIV and AIDS in 10 Years 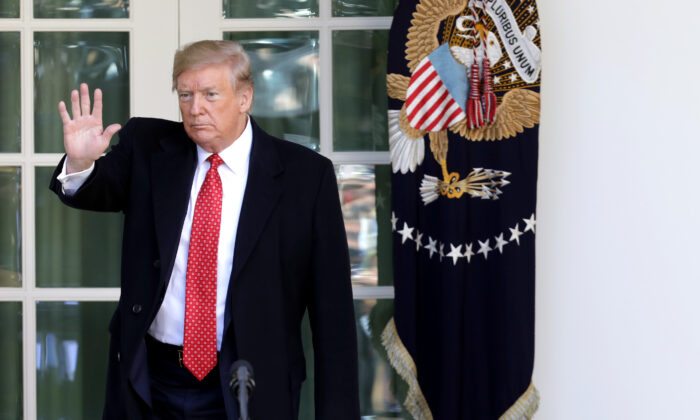 President Donald Trump waves after giving a presidential ‘pardon’ to the National Thanksgiving Turkey 'Butter' during the traditional event in the Rose Garden of the White House on Nov. 26, 2019. (Chip Somodevilla/Getty Images)
By Jack Phillips

President Donald Trump on Sunday, reaffirmed his commitment to end HIV and AIDS in 10 years.

Trump’s tweet came on World AIDS Day, which is held on Dec. 1 to raise awareness about the HIV and AIDS pandemic and also was set up to mourn those who have died from the disease.

“On World AIDS Day, The First Lady and I express our support for those living with HIV/AIDS and mourn the lives lost. We reaffirm our commitment to end the HIV/AIDS epidemic in America, community by community where we will eradicate AIDS in 10 years, program already started,” the president tweeted. “American leadership has proven that together we can save lives.”

On World AIDS Day, The First Lady and I express our support for those living with HIV/AIDS and mourn the lives lost. We reaffirm our commitment to end the HIV/AIDS epidemic….

“It was this President who boldly declared in his 2019 State of the Union Address that we are going to end HIV transmissions in the United States within 10 years,” Deere told The Hill, adding: “It’s no surprise that the DNC would attack this President and ignore the facts on World AIDS Day instead of honoring and remembering those we have lost.”

During the 2019 State of the Union address, Trump announced the new “Ending the HIV Epidemic: A Plan for America” to dramatically reduce the number of new infections by 2030.

Months later, in August, he told a rally: “The things we’re doing in our country today, there’s never been anything like it. We will be ending the AIDS epidemic shortly in America, and curing childhood cancer very shortly.”

Meanwhile, over the Thanksgiving holiday, the president visited troops in Afghanistan, served them turkey, and he said peace talks with the Taliban have restarted.

“We’re going to stay until such time as we have a deal or we have total victory, and they want to make a deal very badly,” the president said. “The Taliban wants to make a deal—we’ll see if they make a deal. If they do, they do, and if they don’t, they don’t. That’s fine.”

After a meeting, Afghan President Ashraf Ghani wrote that “both sides underscored that if the Taliban are sincere in their commitment to reaching a peace deal, they must accept a ceasefire. We also emphasized that for any peace to last, terrorist safe havens outside Afghanistan must be dismantled.”