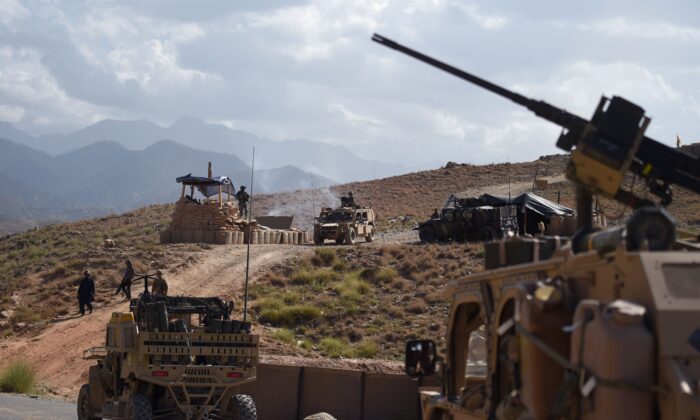 U.S. Army and Afghan commando forces at a checkpoint in the eastern province of Nangarhar, Afghanistan, on July 7, 2018. (Wakil Kohsar/AFP via Getty Images)
Viewpoints

Trump Ready to Keep Promise to Get Out of Afghanistan

The impending winding-down of the war in Afghanistan is an unheralded success of the Trump administration.

There won’t be much objection to the arrangement, as everyone in both parties wants to have as little as possible to do with Afghanistan. Everyone acknowledges that the chief interlocutor, the Taliban, are barbarous, treacherous, and objectively despicable.

But after more than a trillion dollars, more than 23,000 American casualties including 2,440 dead, prolonged international effort, and an inability to pacify the country completely other than by the retention of unsustainably large occupation forces for no evident strategic purpose, it’s time to continue deescalation.

There have been under-recognized successes; while the Taliban are formidable, they don’t control any of the 34 regional capitals and are largely confined to under-populated areas. Afghanistan’s GDP has increased tenfold in 20 years, and literacy rates have risen spectacularly.

It’s not the same Afghanistan that has been too sluggishly primitive to progress at all in the past. The development of the country in the 19 years of Western military involvement has made it much more difficult for the Taliban to prevail, and as their only argument is the foreign presence, the proposed arrangement is to some extent a self-correcting problem.

The well-known truth about Afghanistan is that it is a poor and landlocked country with no resources except opium, and no strategic value, with mountainous terrain populated by fierce, primitive, and xenophobic tribesmen. It would require an occupation force of probably at least 300,000 heavily armed and well-coordinated soldiers to enforce a regime in Afghanistan, and there is nothing there to justify such a deployment.

This was the conclusion reached by the British during the numerous Anglo–Afghan Wars between 1838 and 1919, when they considered extending their vast British Indian Empire (today India, Pakistan, Bangladesh, Myanmar, Sri Lanka, Nepal, and Bhutan) to Afghanistan. They never had more than 100,000 British in that empire, and were deterred from stranding large forces in unremitting Afghanistan. (It was one of the political miracles of all history that the British managed to maintain their position in the Indian subcontinent with such small forces for more than 200 years.)

The Soviet Union famously invaded Afghanistan in 1979, and remained for a decade, with about 150,000 men in the occupying force, but never pacified the country outside of the main cities and were constantly taking casualties from guerrillas who were well-supplied by the United States. They abandoned the whole project and departed in 1989, undefeated, but hardly victorious either, after 6 million Afghans were displaced in the conflict and approximately 1 million killed. (The current population is about 35 million.) The U.S.-led expedition has been an astonishing comparative success by any measurement.

The U.S. involvement began a few weeks after the terrorist attacks on New York and Washington on Sept. 11, 2001, when it came to light that the al-Qaida terrorists were trained in camps in remote Afghan areas, with the toleration of the Taliban government that was engaged in an interminable civil war with tribal, regional, and sectarian opposition groups.

The insertion of small numbers of special forces was sufficient to send the Taliban packing, and the Allied force, authorized by both the United Nations and NATO, set out to modernize and politically cleanse the population.

The U.S. draw-down (to 8,600 military personnel from 13,000) and the agreement with the Taliban to reduce violence, coming after somewhere between 50,000 and 100,000 Afghans are reckoned to have died, somewhat disguises the fact that the Allies have succeeded in their principal goal of chasing al-Qaida out of Afghanistan and overthrowing the government that welcomed and enabled it.

Most members of al-Qaida have been killed, and its terrorist network has been largely destroyed. While the Taliban have been ineradicable, the central government isn’t the paper tiger of earlier times, and the remaining U.S. contingent will assist it in non-ground combat roles. The Americans have made their point about not tolerating terrorist provocations; the Taliban aren’t suicide forces.

Antagonistic leftist regimes in Bolivia, Ecuador, and Uruguay attracted little American notice; Venezuela is only an irritant because of closer commercial connections and the extreme odium of the Chavez-Maduro despotism. Even Cuba, though Trump has reversed the concessions made by Obama, is not a matter of real concern or even interest.

No one not steeped in confidential worldwide counter-terrorism intelligence has any idea of how much terrorist activity has been avoided and of the extent to which the potential for terrorist activity has been eliminated. But everyone of an age to be aware 20 years ago remembers the widespread fear of a pandemic of terrorist outrages conducted by the apparently unlimited numbers of people who were happy to die in the massacre of others.

The late Israeli Prime Minister Ariel Sharon adopted the technique of killing Hamas leadership whenever Hamas conducted a suicide bombing in Jerusalem or Tel Aviv, and this soon shut down the suicide attacks. The rooting out and execution of Osama bin Laden in 2011 and Abu Bakr al-Baghdadi (2019), hiding like moles, illustrated how tenacious they were with their own lives, in contrast to their breezy disregard for the lives of their own followers and the innocent masses of their victims.

The only peace that can work in Afghanistan will be one agreed on by the sponsors of the different factions, particularly Pakistan as the chief source of support for the Haqqani Taliban, but also including India, Iran, and Uzbekistan, who have patronized rival factions in Afghanistan.

The United States will retain sufficient strength to protect its embassy and continue training operations, and has sufficient familiarity with the country to identify the culprits in any serious future provocations. There is an almost unanimous consensus in U.S. public and political opinion that terrorist enemies have to be treated with the utmost severity. No Afghan factions will have any interest in provoking the West, since retribution can be visited at unlimited length and with minimal or no American and allied casualties by the use of drones and conventional air strikes.

There will be no return to the Clinton administration policy of inadequate reprisals for the Khobar Towers (1996) and USS Cole bombings, and Kenyan and Tanzanian embassy attacks (1998) that killed a total of 49 Americans and hundreds of others, and injured about 4,500 mainly local people; the U.S. responses were so limited they constituted a virtual incitement for the stupefying atrocity at the New York World Trade Center and the Pentagon in 2001.

Frequently lost in discussion is that the United States has never had a foreign policy goal that went very far beyond the requirement that it not be threatened. Once it populated its own half-continent, it had no desire to colonize, and released the colonies it seized from others, Cuba and the Philippines, and only retained Puerto Rico and Hawaii at the request of the local populations.

In these circumstances, it can ensure that it is in the interests of no country, nor any force harbored and nurtured by any country, to attack Americans. The abrupt killing of Iranian Gen. Qassem Soleimani last month illustrated that and the tame Iranian response demonstrates that the message has been received.

The United States and its allies could probably have done better and could probably have left Afghanistan just as well years ago, but they have succeeded in their primary goal of punishing and discouraging terrorism. They can now scale back the conflict with honor intact, as another Trump promise kept.

Conrad Black has been one of Canada’s most prominent financiers for 40 years, and was one of the leading newspaper publishers in the world. He is the author of authoritative biographies of Franklin D. Roosevelt and Richard Nixon, and most recently “Donald J. Trump: A President Like No Other.”