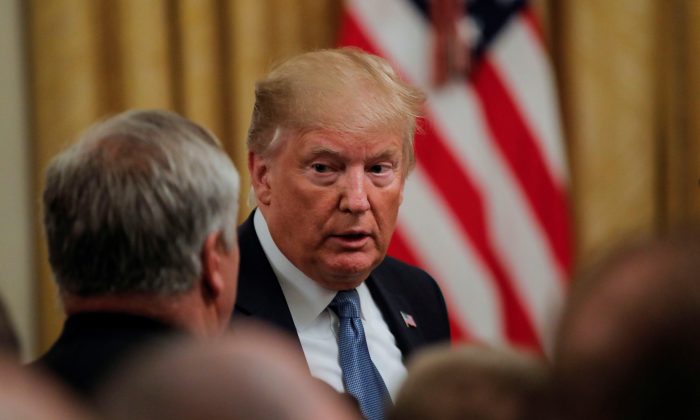 President Donald Trump talks with attendees as he departs an event held to tout his administration's environmental policies in the East Room of the White House in Washington on July 8, 2019. (Carlos Barria/Reuters)
2020 Election

After a federal judge appointed by President Barack Obama ruled against him in the 2020 census case, President Donald Trump issued a sharp critique questioning whether there was a precedent for the move.

“So now the Obama appointed judge on the Census case (Are you a Citizen of the United States?) won’t let the Justice Department use the lawyers that it wants to use,” Trump wrote late July 9.

“Could this be a first?” he wondered.

The Trump administration is seeking to place a citizenship question in the decennial census, a move that has been thwarted by the judiciary. Still fighting, the Department of Justice sought to switch legal teams working on the case.

So now the Obama appointed judge on the Census case (Are you a Citizen of the United States?) won’t let the Justice Department use the lawyers that it wants to use. Could this be a first?

But an Obama-appointed judge in New York said they couldn’t right now.

All of the other lawyers must submit an affidavit that provides “satisfactory reasons” for leaving the case, Furman said, citing a rule from the U.S. District Courts for the Southern and Eastern Districts of New York.

“Defendants provide no reasons, let alone ‘satisfactory reasons,’ for the substitution of counsel,” he said.

No reason was given, but Attorney General William Barr said on Monday that the lawyer who was leading the team, James Burnham, informed him some of the people working on the case preferred “not to continue during this new phase.”

Burnham came to him and “indicated it was a logical breaking point since a new decision would be made and the issues going forward would hopefully be separate from the historical debates,” Barr added.

JUST IN: Plaintiffs in #CitizenshipQuestion lawsuits in NY argue @TheJusticeDept attorneys should not be allowed to withdraw without “clear articulation of ‘satisfactory reasons'” & “unequivocal assurances” that it won’t delay ongoing litigation & any future sanctions requests???? pic.twitter.com/sKsfVanUnB

The request to shift legal teams was submitted on Monday, prompting a challenge from attorneys at the American Civil Liberties Union (ACLU) and other groups who asked the judge not to grant the motions “absent a clear articulation of ‘satisfactory reasons’ for these withdrawals and unequivocal assurances from defendants that these withdrawals will not delay the conduct of this case.”

The group celebrated Furman’s decision, writing in a statement: “The court ruled that the Trump administration must satisfactorily explain why it has removed its census lawyer team. The administration is acting like it has something to hide. We won’t rest until we know the truth.”

Furman also wrote in his decision that the Department of Justice still has the same deadlines even if the new legal team is approved.

“As this court observed many months ago, this case has been litigated on the premise—based ‘in no small part’ on Defendants’ own ‘insist[ence]’—that the speedy resolution of Plaintiffs’ claims is a matter of great private and public importance,” he wrote. “If anything, that urgency—and the need for efficient judicial proceedings—has only grown since that time.”