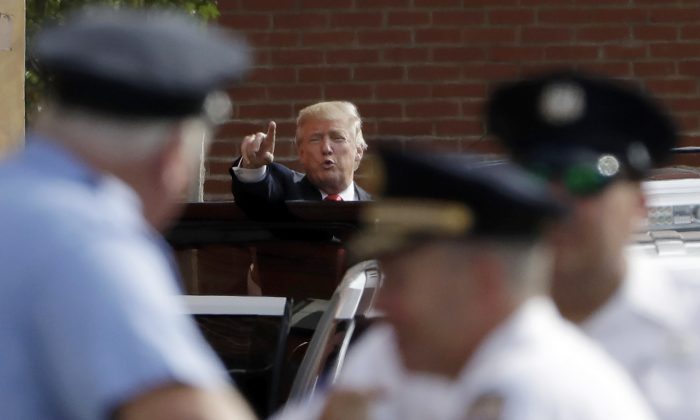 PHILADELPHIA—Donald Trump was met with tears and gratitude as he sat with African-American supporters Friday, including the mother of a young woman who was killed in an attack by a group that included men who had entered the U.S. illegally.

The back-to-back meetings, held in a ballroom in Northwest Philadelphia, underscored the balancing act the Republican nominee is playing as he tries to expand his support in the race against Democrat Hillary Clinton. While Trump works to broaden his appeal among more moderate and minority voters, he’s also working to maintain his popularity with his core GOP base by pressing his hard-line views on immigration.

At an invite-only roundtable discussion, Trump met with a dozen local business, civic and religious leaders who praised him for coming to “the hood” as part of his outreach efforts. Trump was warmly received by the group, including Daphne Goggins, a local Republican official, who wiped away tears as she introduced herself to Trump. “For the first time in my life,” she told him, “I feel like my vote is going to count.”

Renee Amoore, a local business leader, assured Trump that he has support in the black community, despite his low standing in public opinion surveys.

“People say, Mr. Trump, that you have no African-American support. We want you to know that you do,” she said. “We appreciate you and what you’ve done, coming to ‘the hood,’ as people call it. That’s a big deal.”

But Trump’s meeting also highlighted the challenges he faces making inroads with African-Americans and Latinos. Protesters gathered in front of the building where Trump appeared, and a coalition of labor leaders met nearby to denounce Trump’s outreach to black voters as disingenuous and insulting.

Ryan Boyer of the Labor District Council said Trump “has no prescription to help inner-city America.”

“The best predictor of future behavior is past behavior,” said Boyer, speaking at the council’s headquarters. “He did nothing for African-Americans in 30 years of public life. We reject his notion that we have nothing to lose by supporting him.”

The next stop for Trump is Detroit, where blacks make up some 83 percent of the population. He’s expected to visit a church with a predominantly black congregation while there Saturday.

In addition to planning trips to urban centers, Trump has revamped his campaign pitch to include a direct appeal to African-Americans and Hispanics, making the case that decades of Democratic policies have failed them. “You live in your poverty, your schools are no good, you have no jobs,” he recently argued.

But so far, Trump’s outreach has largely fallen flat. Many minority voters have found Trump’s dire description of their lives to be condescending, and African-American community leaders have dismissed Trump’s message—delivered largely in front of predominantly white rally audiences—as intended more to reassure undecided white voters that he’s not racist than to actually help communities of color. Public opinion surveys show Clinton polling far ahead of Trump with minority voters.

Even on Friday, the signs of his unpopularity hung subtly in the background. The pastor who operates the nonprofit where he held his meetings publicly distanced himself from the visit.

And attendee Debbie Williams, a Republican running for Congress, told Trump her race was “going well,” but added, “I can only imagine what’s going to happen” after the meeting.

Trump continues to take a hard-line stance on illegal immigration, the dangers of which he highlighted once again Friday. The New York billionaire met with Shagla Hightower, whose daughter, Iofemi, was killed along with two friends in a 2007 attack in a Newark, New Jersey, school yard.

In an emotional exchange, Shalga Hightower said her daughters’ killers “should have never been here” and praised Trump for giving her daughter recognition. “I truly, truly thank you from the bottom of my heart,” she said as Trump listened intently. At one point, she and her publicist embraced in tears and Trump placed his hand on Hightower’s shoulder to offer comfort.

At his events, Trump has been featuring parents whose children have been killed by people living in the U.S. illegally.

Hightower’s story is “a horrible story,” Trump said, “but it’s a story a lot of people are going through.”

“Tremendous numbers, tens of thousands of people, are being affected,” he claimed, adding that Clinton “has no clue and doesn’t care.”

Studies have shown that immigrants are, in fact, less likely to commit crimes than native-born Americans.

Also Friday, the FBI released 58 pages of documents from its recently closed investigation into Clinton’s use of a private email server during her tenure as secretary of state.

The documents include a summary of agents’ interviews with Clinton and several of her aides along with technical details about how the server in the basement of Clinton’s home was set up.

After a yearlong investigation, the FBI recommended against prosecution in July, and the Justice Department closed the case. Neither Clinton nor her running mate Tim Kaine had scheduled campaign events Friday.