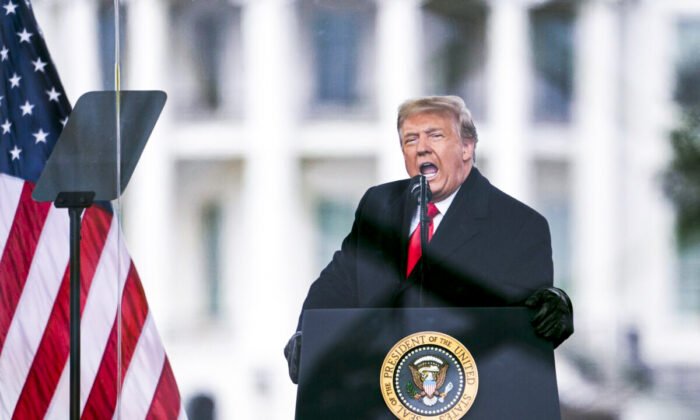 Former President Donald Trump is increasingly endorsing candidates for state and national office who align with his views on election integrity, according to a review of the nearly 90 endorsements Trump doled out since leaving office earlier last year.

Of the 41 candidates Trump endorsed since the off-year election on Nov. 2, 36 had either taken decisive action to side with Trump on election integrity or had received an endorsement featuring an explicit reference to their stance on the issue.

That makes for a rate of nearly 90 percent in the seven weeks since Nov. 2, a sharp increase from the Trump endorsements leading up to that date. Of the 48 candidates Trump endorsed between Jan. 25 and Nov. 2, roughly half met the same criteria on election integrity.

The focus on election integrity is no surprise considering that the issue has taken on paramount significance for Trump from the early days of the aftermath of the 2020 election. The former president devoted a large portion of his first public speech since leaving the White House to the issue and has not toned down his scrutiny of election irregularities since.

“It’s, I think, the number one issue,” Trump said at a rally on Nov. 5. “There has been a lot of cheating in elections over the years, but it’s never been like this. They just went crazy. And they did because they had no idea that we were going to get so many votes.”

Trump has endorsed nine of 147 Republican members of Congress who voted on Jan. 6 and Jan. 7 to object to the counting of the presidential electors from Arizona and Georgia. The former president has also endorsed a number of state-level lawmakers. In most cases, he made explicit references to the candidates’ stance on election integrity in his formal endorsement statement. In cases when he did not, the candidates have made their position on the issue clear on their campaign websites.

In Michigan alone, Trump has endorsed 10 candidates for the state’s legislature as well as the Republicans running for secretary of state and attorney general, all with direct references to their strong stances on election integrity.

“Super Lawyer Matthew DePerno is running for Attorney General in the Great State of Michigan. He has defended the Constitution for 20 years, and has been on the front lines pursuing fair and accurate elections, as he relentlessly fights to reveal the truth about the Nov. 3rd Presidential Election Scam,” reads a typical election-integrity-related endorsement from Trump.

Trump’s focus on the state-level candidates in Michigan is likely linked to his frustration with the progress of the election inquiry in the state. Trump voiced his vexation on Dec. 21, blaming the lack of progress on “Republican RINOs in the Michigan House and Senate” who “don’t want to touch the subject.”

Although election integrity emerged as the top issue for Trump after the 2020 election, his concern about voter fraud dates back years. Trump claimed that millions of illegal votes were cast in the 2016 election. Shortly after taking office in 2017, he established an election integrity task force, which ultimately folded after Democrat-controlled states refused to share voter rolls and other data.

The former president’s recent endorsements are also a reflection of his warnings to the Republican party that perceived systemic election issues may dampen voter turnout unless the GOP moves swiftly to rectify the system.

“If we don’t solve the Presidential Election Fraud of 2020 (which we have thoroughly and conclusively documented), Republicans will not be voting in ‘22 or ‘24,” Trump said in a statement on Oct. 13. “It is the single most important thing for Republicans to do.”

Democrats decry Trump’s election integrity rhetoric as the “Big Lie” and generally label all of his concerns as being false and debunked. While a number of Trump’s claims do fall into that category, the validity of many others has yet to be determined.

Trump has been pushing for state-level audits both in the states where he challenged the outcome of the 2020 election and beyond.

A review of the 2020 election in Wisconsin conducted by a conservative public interest legal firm and released earlier this month found that while there was no evidence of outright fraud or so-called late-night ballot dumps, more illegal votes were almost certainly cast in the contest than Joe Biden’s official margin of victory.

In late September, the Republican-ordered audit of the 2020 election in the state’s most populous county found only minor discrepancies in the final official vote count but reported a number of inconsistencies.

Trump has issued a number of endorsements to candidates who don’t align with his views on the 2020 election. Among these is Sen. Chuck Grassley (R-Iowa), who openly criticized Trump’s conduct tied to the 2020 election. Grassley didn’t join a handful of Republican Senators on Jan. 6 and Jan. 7 in objecting to the counting of the electoral vote.

Trump is the de-facto leader of the Republican Party and any candidate with his endorsement is virtually assured to sail to victory in the primary election. His endorsement track record in general elections is likewise impressive. According to Ballotpedia, in 2020, 141 of the 183 candidates Trump endorsed triumphed in their races.