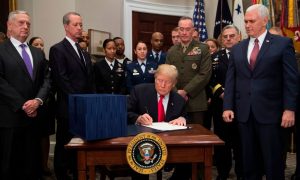 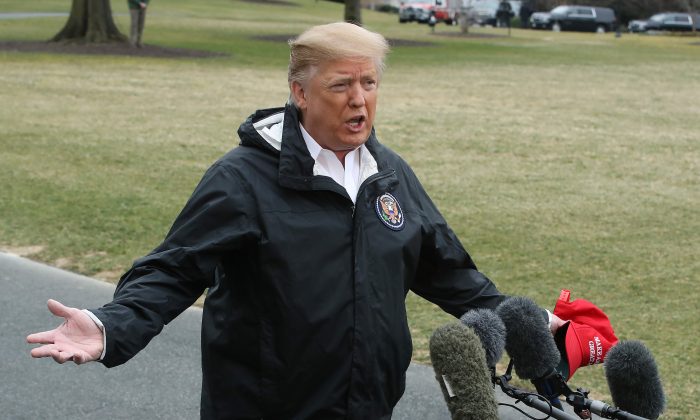 Budget calls for $8.6 billion for wall to secure the southern border
By Emel Akan

WASHINGTON­—The White House unveiled a new budget resolution calling for a significant cut to federal government spending. The proposal aims to reduce deficits by more than $2.7 trillion over 10 years and balances the budget in 15 years.

President Donald Trump unveiled a new outline for government spending on March 11, titled “A Budget for a Better America: Promises Kept. Taxpayers First.” This will be Trump’s third budget resolution sent to Congress.

“My 2020 budget builds on the tremendous progress we have made and provides a clear roadmap for the Congress to bring federal spending and debt under control,” Trump said in his budget proposal.

The vast majority of spending reductions are in non-defense discretionary programs, according to the blueprint, which requests a 5 percent cut to the 2019 cap level. However, the spending cut isn’t across the board, according to the White House. Hence, the budget provides flexibility to make investments where necessary. As part of the spending-cut initiative, the administration has also identified a number of wasteful and inefficient programs.

Russ Vought, acting director of the Office of Management and Budget, touted that the budget has “more spending reductions proposed than any administration in history.”

Economic progress made under Trump’s presidency has been threatened by “our unsustainable national debt, which has nearly doubled under the previous administration and now stands at more than $22 trillion,” he said at a White House press briefing on March 11.

“Congress has been ignoring the president’s spending reductions for the last two years. It’s only now in our third budget that they’re willing to have a conversation about the national debt.”

According to the White House, interest payments on the national debt will exceed military spending by 2024.

The presidential budget requests $750 billion for overall defense (including defense-related Energy Department funding), an increase of 5 percent from the 2019 level. About $718 billion would go to the Defense Department.

“To be clear, this is not funding for endless wars. This is for research and development and procurement to fund the most awe-inspiring military,” Vought said.

The budget also calls for $8.6 billion for the completion of a wall to secure the southern border. This amount will be the remaining portion that is needed in addition to what is being secured as a result of the national emergency declared by the president.

The funding will come from two sources. Department of Homeland Security will invest $5.4 billion in border security technology, infrastructure, and equipment to help CBP prevent, detect, and interdict illegal border crossings, and $3.6 billion will come from the new military construction resources at the Department of Defense.

In line with last year, the president calls for $200 billion for infrastructure spending that will leverage up to a trillion dollars, with state and private funding complementing the federal funds.

Vought said that the administration is “totally ready and willing to talk with Congress” about how to put forward an additional $200 billion in new infrastructure investment.

The budget also calls for the extension of individual tax cuts and makes them permanent.

Vought said that “Medicare spending will go up every single year by healthy margins and there are no structural changes for Medicare beneficiaries.”

As part of the budget, the administration proposes uniform work requirements for Medicaid, TANF, SNAP (food stamps), and certain housing programs. By strengthening work requirements, the administration wants to end people’s dependency on government benefits. Accordingly, individuals between 18 and 65 years old will be expected to either work, be engaged in job training, or have community engagement.

Another key initiative will be measures to lower drug costs. The budget proposes a drug pricing strategy that promotes generic drugs and reduces out-of-pocket costs. It also wants to reform the federal retirement benefits system to bring those benefits more in line with what the private sector has.

The administration believes the government can save hundreds of millions of dollars by reforming underperforming programs such as Job Corps, which has made headlines in recent years due to security incidents reported at its centers. The program spends $35,000 per participant and the White House proposes to reform the program and close some of its centers.

Another area that needs fixing is the State Department’s cultural and exchange programs, which spend $600 million, Vought said.

Other key priorities in the budget include a one-time, mandatory investment of $1 billion to support underserved communities and stimulate employer investments in child care for working families. The budget also has paid parental leave proposal for working parents.

The budget materials released by the White House don’t include the appendices used by Congress and some supporting documents that outline the reasons for major savings and other reforms. Those documents will be released next week, according to a senior administration official.