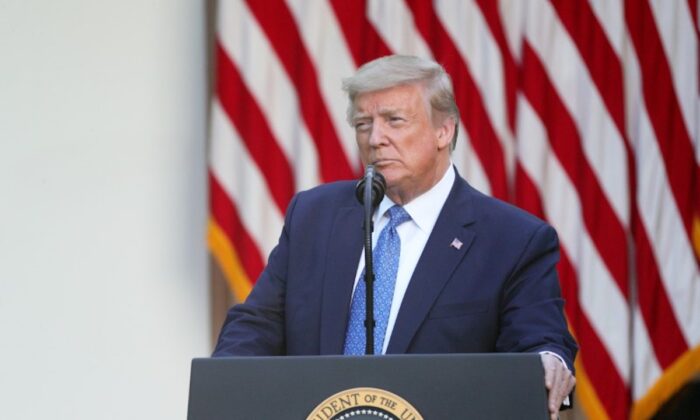 President Donald Trump delivers a statement on the ongoing protests in the wake of the death of George Floyd while in Minneapolis police custody, in the Rose Garden at the White House on June 1, 2020. (Tom Brenner/Reuters)
US News

President Donald Trump said he’s given the order for National Guard troops to start withdrawing in Washington, noting that everything is “under perfect control” after the sometimes violent protests, acts of vandalism, and arson following the death of George Floyd in Minneapolis.

Trump ordered troops and federal law enforcement agents into the city to control the streets following looting and violence. Days later, as the protests eased, Washington Mayor Muriel Bowser called on the White House to withdraw National Guard troops that some states had deployed to the nation’s capital.

“I have just given an order for our National Guard to start the process of withdrawing from Washington, D.C., now that everything is under perfect control,” the president wrote on Twitter. “They will be going home, but can quickly return, if needed. Far fewer protesters showed up last night than anticipated!”

While there were online claims that about a million protesters would show up outside the White House on June 6, the actual turnout appeared to be a fraction of that. Bowser, in solidarity with the protesters, had the words “Black Lives Matter” painted in yellow letters on 16th Ave. in Washington.

Of the response to the June 6 protest, the president wrote late at night that the “National Guard, Secret Service, and D.C. Police have been doing a fantastic job. Thank you!”

The marches on June 6 featured few reports of problems in scenes that were more often festive than tense. Authorities haven’t released crowd estimates, although clearly tens of thousands of people—and perhaps hundreds of thousands—turned out nationally.

Congressional Democrats are preparing a sweeping package of police reforms, which is expected to include changes to immunity provisions and creating a database of use-of-force incidents. Revamped training requirements are planned, too—among them, a ban on chokeholds.

Minneapolis police officer Derek Chauvin pressed his knee on Floyd’s neck during a May 25 arrest, pinning him to the ground for more eight minutes. Chauvin and three other officers were fired the following day, and Chauvin now faces charges of second-degree murder and manslaughter.

The other officers, Thomas Lane, 37, Tou Thao, 34, and J. Alexander Kueng, 26, have been charged with two counts of aiding and abetting.