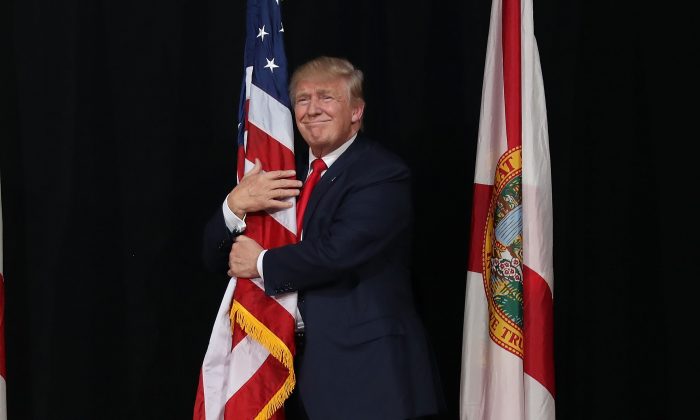 President-elect Donald Trump drew ire after tweeting a proposal to ban burning of the U.S. flag.

“Nobody should be allowed to burn the American flag – if they do, there must be consequences – perhaps loss of citizenship or year in jail!” he tweeted on Tuesday morning.

But some observers noted that Trump’s latest tweet might be him setting a “trap” of sorts for media outlets. More than 10 years ago, in 2005, Trump’s Democratic rival, Hillary Clinton proposed the Flag Protection Act of 2005 when she was a senator from New York.

The punishment was similar to what Trump proposed: one year in jail and a fine of $100,000.

As the New York Times reported in December 2005, “Hillary Clinton is co-sponsoring a bill to criminalize the burning of the American flag. Her supporters would characterize this as an attempt to find a middle way between those who believe that flag-burning is constitutionally protected free speech and those who want to ban it, even if it takes a constitutional amendment.”

The Times added that with Clinton’s proposal, which was sponsored by then-Senator Robert Bennett of Utah, “It’s hard to see this as anything but pandering—there certainly isn’t any urgent need to resolve the issue.”

Veterans to Protest at College That Stopped Flying US Flags