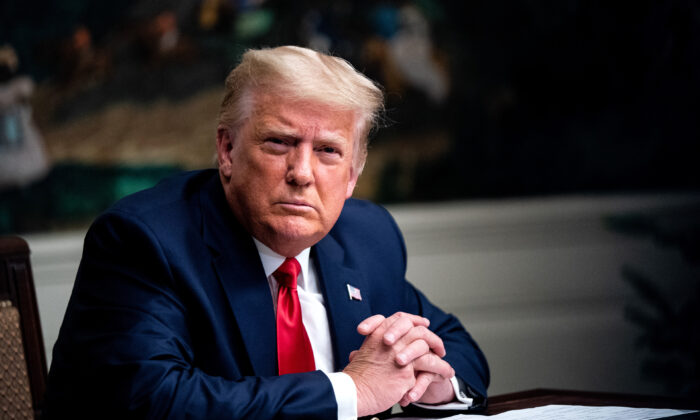 President Donald Trump on Nov. 30 pressed Republican Georgia Gov. Brian Kemp to overrule Secretary of State Brad Raffensberger on his decision to not require signature matching during the state’s recount.

Earlier this month, Raffensberger announced that it isn’t possible to match the signature on the outer ballot envelope to the absentee ballot itself. Ballots are separated from the envelopes to protect voters’ privacy, he said.

But Trump and other Republicans said the move is an invitation to significant election fraud, as it reduces the ability to detect any irregularities by matching signatures to how an individual voted.

Trump asked on Twitter about why Kemp won’t “use his emergency powers, which can be easily done, to overrule his obstinate Secretary of State, and do a match of signatures on envelopes?”

“It will be a ‘goldmine’ of fraud, and we will easily WIN the state,” Trump wrote on Twitter.

Kemp’s office didn’t immediately respond to a request by The Epoch Times for comment.

A spokesperson for Kemp told Newsweek: “Georgia law prohibits the Governor from interfering in elections. The Secretary of State, who is an elected constitutional officer, has oversight over elections that cannot be overridden by executive order.”

Kemp, when he was the secretary of state, was accused by Democrats of interfering with the state’s election to win in 2018.

The spokesperson added, “As the Governor has said repeatedly, he will continue to follow the law and encourage the Secretary of State to take reasonable steps—including a sample audit of signatures—to restore trust and address serious issues that have been raised.”

Since the Nov. 3 election, Kemp has issued few public statements about the election. On Nov. 20, the Republican governor urged Raffensberger, the state’s top election official, to audit the signatures of the ballots.

His announcement came after Raffensberger was forced to issue a correction to a news release saying he incorrectly certified Georgia’s election results. Hours later, Raffensberger said he certified the results.

On Nov. 29, Trump told Fox News that he regrets having ever endorsed Kemp for governor in his 2018 race against Democrat Stacey Abrams.

During a risk-limiting audit—also known as a manual recount—earlier in the month, officials in Georgia found thousands of uncounted votes in four counties. Dozens of witnesses in sworn affidavits claimed potential voter fraud and errors, including one recount worker who said she saw a tranche of “pristine” ballots that appeared to have been unused that went “98 percent” for Biden.

An emergency rule in Georgia that was implemented earlier in 2020 mandates that every absentee ballot goes through a signature-matching verification process. After the signature is verified, the ballot is separated from the outer envelope that contains the signature.

Raffensberger said in an interview with WSB-TV that election workers have the ability to match signatures, and downplayed allegations of fraud or irregularities.

To compound the state’s election woes, a judge issued a temporary restraining order late on Nov. 29, declaring that election officials were barred from wiping or altering Dominion Voting Systems machines used in the November election. It came after the judge’s initial ruling ordering election officials not to tamper with the machines, before reversing the order when defendants argued that the machines were not in their possession, and that the relevant parties were not listed in the lawsuit.