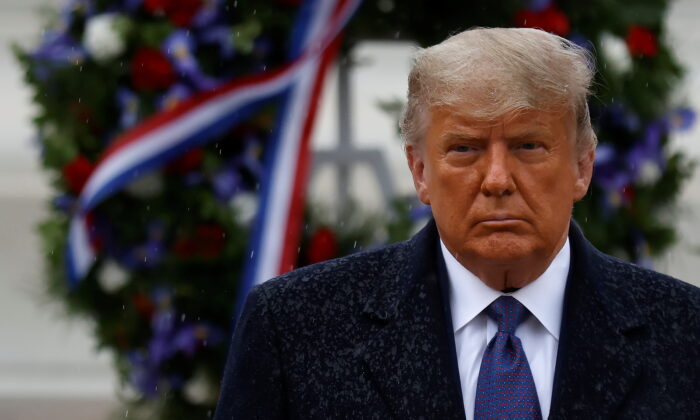 President Donald Trump turns after placing a wreath at the Tomb of the Unknown Soldier as he attends a Veterans Day observance in the rain at Arlington National Cemetery in Arlington, Virginia on Nov. 11, 2020. (Carlos Barria/Reuters)
Arizona

Trump Presses for Audit of Votes in Arizona

“From 200,000 votes to less than 10,000 votes,” Trump wrote on Twitter in reference to a local news outlet that shows Democrat presidential candidate Joe Biden’s lead in the state slowly dwindling. “If we can audit the total votes cast, we will easily win Arizona also!”

The Trump campaign and the Republican National Committee filed a lawsuit in the state, claiming that Maricopa County officials inappropriately rejected ballots cast by in-person voters on Nov. 3.

The office of Secretary of State Katie Hobbs, a Democrat, said that fewer than 25,000 votes have to be counted, while Maricopa County officials said that 6,700 ballots are left.

Arizona’s secretary of state office hasn’t responded to a request for comment about a potential audit or recount.

Arizona law allows recounts if the margin is within 0.1 percent or 200 votes, whichever is the smaller number.

Both Fox News and The Associated Press called the race for Biden. The Epoch Times has chosen not to declare a winner in Arizona—or the entire presidential election—pending the outcome of legal challenges and the final vote cast by the Electoral College, which determines the winner of a presidential election.

Biden is ahead of Trump in Arizona by about 12,000 ballots, according to state election data.

Arizona Attorney General Mark Brnovich, a Republican, said on Wednesday that he believes Biden won in the state. “The reality is, right now there’s less than 50,000 votes to count and the president would have to get about 65 percent of them to win Arizona. So it does appear that Joe Biden will win Arizona,” he said on Fox Business. He didn’t make mention of the possibility of court rulings or recounts.

“Just to be very clear, it is mathematically possible that the president could win 65 percent of the [remaining] votes. But I’m just saying that, if you talk to political people, pollsters, mathematicians, statisticians, they’ll say that based on the trend line, that’s not likely to happen,” he added in the interview.

In another Twitter post at around the same time on Thursday, Trump criticized North Carolina’s elections officials for taking so long to count votes.

“It took long enough!” Trump wrote in reference to an Associated Press report on Thursday morning that declared him the winner in Alaska. “What is taking North Carolina so long? Are they looking for more ballots to fix that one also?” Trump also remarked. “Now with a recount, we will win Georgia also.”

In Georgia, Secretary of State Brad Raffensberger announced Wednesday that a full manual recount of the entire state will be carried out.

“This will help build confidence. It will be an audit, a recount, and a recanvas all at once,” Raffensperger, a Republican, stated at a press conference. “It will be a heavy lift.”

Biden is only ahead of Trump by about 14,111 votes in Georgia.

“Every legal vote will count,” he said. “They executed their responsibilities and they did their job,” Raffensperger said. “This is a process. It is a process defined by law.”