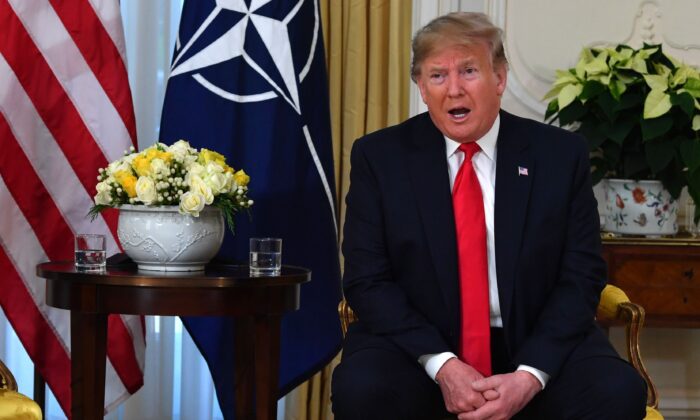 Trump: Press Needs to Get Inside Iran as Regime Slaughters ‘Thousands’ of Protesters

President Donald Trump urged the news media to get inside Iran and monitor the situation, in which the Islamic regime is reportedly killing scores of people protesting its policies.

“Iran is killing perhaps thousands and thousands of people right now as we speak,” Trump said on Dec. 3 during a meeting with NATO Secretary General Jens Stoltenberg in London.

At least 208 people are believed to have been killed during anti-government demonstrations in Iran, Amnesty International reported on Dec. 2.

The death toll is based on “credible reports” the human rights nonprofit gathered from sources inside and outside Iran, including victims’ relatives, journalists, and human rights activists.

“The real figure is likely to be higher,” the report stated.

Widespread protests broke out in Iran on Nov. 15 after authorities announced a new petrol-rationing scheme that would see gasoline prices raised up to 50 percent.

It also means private vehicles are now restricted to 16 gallons of fuel monthly, while any fuel purchases in excess of this limit will incur an additional charge of $0.98 per gallon.

Authorities said the new scheme aims to redistribute money to the country’s neediest citizens, however, it quickly faced backlash from citizens throughout the country who took to the streets to call for an end to the Islamic Republic’s government.

The regime acknowledged on Nov. 27 that 200,000 took part in the protests and 7,000 were arrested, marking possibly the largest anti-government demonstrations in the regime’s 40-year history.

The regime blamed “thugs” for the protests, saying hundreds of banks, gas stations, and sites used by government and security forces were attacked or torched.

Iran’s Supreme Leader Ayatollah Ali Khamenei suggested the protests were the work of a “very dangerous conspiracy that a lot of money had been spent on.”

Iran’s Intelligence Ministry said eight people linked to the CIA were arrested, six of whom participated in the protests and two tried to send information abroad.

“These elements had received CIA-funded training in various countries under the cover of becoming citizen-journalists,” the state news agency IRNA quoted the ministry as saying.

Iran is one of the world’s most repressive countries for journalists, according to the nonprofit Reporters Without Borders (RSF).

“State control of news and information is unrelenting and at least 860 journalists and citizen-journalists have been imprisoned or executed since 1979,” RSF states on its website.

Private citizens are banned from forming news media in the country, and all the news is controlled by the regime. Still, Farsi-speaking foreign media, including the U.S.-government-funded Radio Farda and Voice of America are popular among Iranians, a fact decried in 2018 by Iranian President Hassan Rouhani, Farda reported.

“It is the citizen-journalists on social networks who are now at the centre of the battles for freely-reported news and information and for political change in Iran,” RSF stated.

Citizen journalists, however, have had their efforts hindered by the regime’s blocking of internet access at critical times, just as it happened during the recent protests when web access was blocked for a week.

Trump imposed extensive sanctions on Iran in 2018 after quitting the Iran nuclear deal. He’s offered to negotiate a new deal with Iran that would address not only its nuclear program—a particular source of concern for Iran’s regional rivals—but also a plethora of other activities the United States has deemed unacceptable, such as Iran’s ballistic missile program and funding terrorists and militias across the region. Tehran has refused to talk until the United States returns to the deal and lifts sanctions.

The regime has put on a strong face, but the fuel rationing seems to reflect how deeply the Iranian economy has been affected.

Oil exports are the regime’s main source of foreign currency, which it needs to pay its terrorist and militia proxies.

Trump has repeatedly said that Iran will eventually want to negotiate.

Katabella Roberts, Reuters, and The Associated Press contributed to this report.