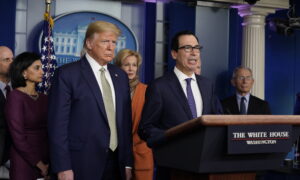 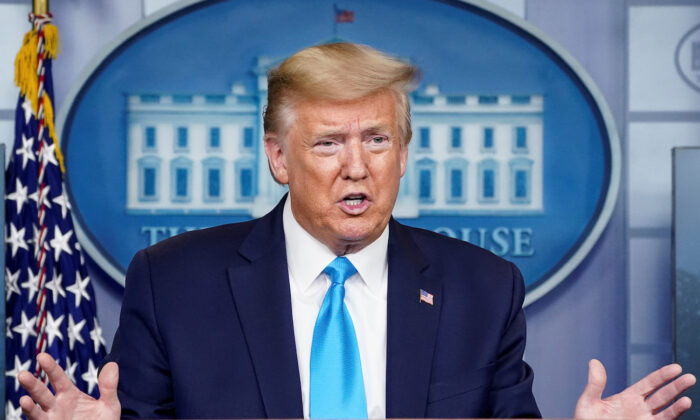 President Donald Trump said at a White House briefing he expects a sharp economic rebound later in the year due to what he said is “tremendous pent-up demand” combined with massive stimulus efforts.

Trump was asked by a reporter at an April 10 briefing of the White House COVID-19 task force what his top economic advisors thought of the new forecast by economists at JPMorgan, America’s biggest bank, that second-quarter output will nosedive by 40 percent.

“My economic advisors are interested in the third quarter and, really, the fourth quarter. And I think we have a chance to do record fourth-quarter numbers because there’s a tremendous pent-up demand,” he said.

Trump added that this week’s furious Wall Street rally, which saw stock indexes surge by historic amounts despite bad pandemic news, was proof of investor confidence and the potential for a V-shaped recovery.

“With all of this news, what would lead you to believe we were going to have the best stock market week—a shortened week—in 50 years? Almost broke the all-time record. You know what that is? That’s a pent-up demand.”

Trump also credited the “tremendous” stimulus being pumped into the economy for raising the probability of a quick recovery.

The JPMorgan analysis that was referenced in the question to Trump followed an earlier Goldman Sachs forecast that predicted a 34 percent plunge in the second quarter, and a Bank of America estimate that said unemployment could soar to over 15 percent.

And those predictions came in the wake of staggering weekly jobless claims figures, which showed that, over the past three weeks, almost 17 million Americans have filed for unemployment.

Still, both Bank of America and Goldman Sachs said they expect a sharp rebound after the pandemic subsides.

“We’re seeing light at the end of the tunnel. You see it. I see it. And I think we’re going to go like a rocket ship once we get back to business. There’s a lot of pent-up energy and demand,” Trump told top CEOs from the banking and finance industry at a White House small business relief update meeting on April 7.

Trump said at a briefing Thursday that economic shutdowns have exacted “a tremendous toll, mentally, on a lot of people.”

The CCP virus has spread aggressively across the nation, with Johns Hopkins figures on Friday evening noting nearly 500,000 infections and over 18,000 deaths.