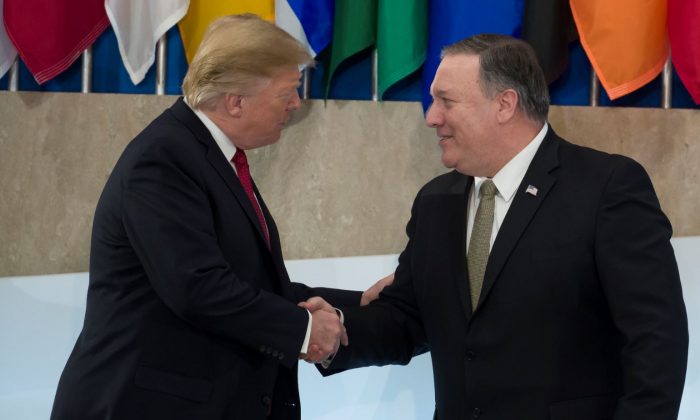 President Donald Trump, (L) with Secretary of State Mike Pompeo before speaking at the Global Coalition to Defeat ISIS meeting, at the State Department, in Feb. 6, 2019. (Alex Brandon/AP Photo)
Politics

Trump Predicts Full Defeat of ISIS in Iraq, Syria by Next Week

U.S. President Donald Trump said during a visit to the State Department on Feb. 6 that he is confident troops fighting ISIS will be announcing the 100 percent defeat of the self-proclaimed caliphate within a week.

“Nobody thought it was possible to do it this quickly,” Trump told members of the Global Coalition to Defeat ISIS at a meeting in Washington.

“It should be formally announced, probably sometime next week, that we will have 100 percent of the caliphate,” he said. “[T]he ISIS caliphate has been decimated.”

U.S. officials have said in recent weeks that ISIS has lost 99.5 percent of its territory and is holding on to less than 2 square miles in Syria, in the villages of the Middle Euphrates River Valley, where the bulk of the fighters are concentrated.

Trump praised the combined efforts of the United States military, coalition partners, and the Kurdish-led Syrian Democratic Forces who together have “eliminated more than 60-mile high-value ISIS leaders” and incurred ISIS other significant losses. “[T]ens of thousands of ISIS fighters are gone. They’re gone,” he said.

“We’ve eliminated almost every one of them,” he told representatives from the 79-member coalition.

The president said that although ISIS is “always going to have people,” as there is no military solution to defeat the “demented” ideology, “ISIS can no longer claim widespread ownership over local governments in Syria and Iraq.”

“Their land is gone,” he said.

While recognizing that after the defeat, there will always remain ISIS remnants that “can be very dangerous,” Trump said that the U.S. coalition will continue to work together with other countries across the region to “search them out.”

“Rest assured, we will do what it takes to defeat every ounce and every last person within the ISIS madness, and defend our people from radical Islamic terrorism,” he continued.

Trump also reiterated that his administration is continuing to work toward bringing home the 2,000 U.S. forces who have been helping fight ISIS in Syria as other countries in the region “step up their commitments.”

“We look forward to giving our brave warriors in Syria a warm welcome back home,” Trump said.

Trump announced the troop withdrawal in December, citing the upcoming defeat of ISIS and that U.S. forces were no longer needed there. A Department of Defense spokesman confirmed on Jan. 11 that the coalition had started the withdrawal process.

Defense officials have confirmed that some equipment has already has been moved out of Syria, and that plans for the withdrawing of troops are being formulated with the help of allies and partners on the ground.

Commander of U.S. forces in the Middle East Gen. Joseph Votel told lawmakers during a hearing Feb. 5, “I am not under pressure to be out by a specific date and I’ve not had any specific conditions put upon me.”

He said that the United States and its partners will continue to maintain pressure on ISIS cells in Syria and beyond.

Trump sent a tweet that work toward the pullout would continue alongside operations to ensure the complete destruction of ISIS, saying that he did not want the Kurdish forces to provoke Turkey into war.

The decision to withdraw the troops in Syria was met with some resistance. Jim Mattis resigned as defense secretary days after the announcement, citing a difference in views.

Upon learning of the announcement, Trump thanked Mattis for his service and for his work “getting allies and other countries to pay their share of military obligations,” Trump wrote in his tweet. Patrick Shanahan is currently acting secretary of defense.

White House officials have been insisting that the time has come for other nations to step up their contributions to the fight.

“[Trump] doesn’t believe that the United States can solve this problem externally,” a senior administration official said when asked about delivering ISIS an enduring defeat.

The official also said that the withdrawal from Syria would be “conditions-based,” with U.S. forces staying in the vicinity of the U.S. base at al-Tanf, in southern Syria, until the very end.

And the president himself said Wednesday that even then, U.S. forces would stand ready to assist.

“Rest assured, we will do what it takes to defeat every ounce and every last person within the ISIS madness,” Trump told ministers from coalition countries.

“The struggle against terrorism is a shared fight,” he added. “Everyone must do their part and contribute their fair share.”

The United States has spent $6 trillion on post-9/11 wars in the Middle East, according to the Watson Institute of International and Public Affairs (pdf).

Trump is not alone in viewing that investment as ill-advised. Sen. Rand Paul (R-Ky.) said of the exit from Syria, “All of the naysayers in Washington will be against him. But, guess what? If you ask the American people, this is why President Trump won the election.”

The White House and other top U.S. officials have also been working to reassure those concerned that the withdrawal will not impact U.S. allies, like the Kurds, or efforts to deal ISIS a lasting defeat.

“Starting the long overdue pullout from Syria while hitting the little remaining ISIS territorial caliphate hard, and from many directions,” Trump said on Jan. 13. “Will attack again from existing nearby base if it reforms. Will devastate Turkey economically if they hit Kurds.”

“Likewise, do not want the Kurds to provoke Turkey. Russia, Iran, and Syria have been the biggest beneficiaries of the long-term U.S. policy of destroying ISIS in Syria—natural enemies,” Trump said in another post. “We also benefit but it is now time to bring our troops back home. Stop the ENDLESS WARS!”

Secretary of State Mike Pompeo told coalition members earlier on Feb. 6 that while the “nature of the fight is changing,” U.S. goals remained the same.

“It simply represents a new stage in an old fight,” Pompeo said in opening remarks at the conference.

“The drawdown of troops is essentially a tactical change. It is not a change in the mission,” he added. “The fight is one that we will continue to wage alongside you.”

Epoch Times reporters Ivan Pentchoukov and Bowen Xiao, The Associated Press, and Voice of America contributed to this report.